Taapsee Pannu: "I know it is a success-driven industry" 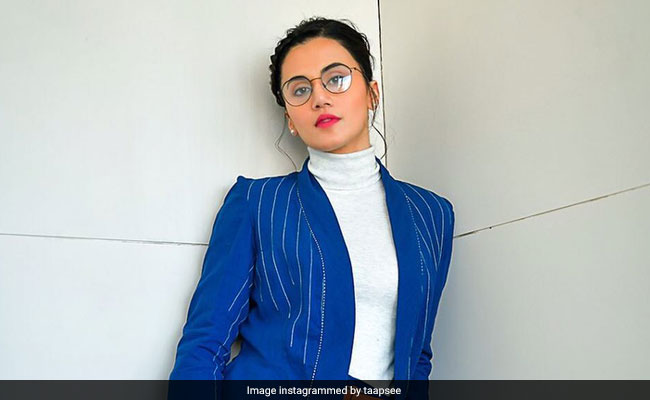 Taapsee Pannu started her journey from the south Indian film industry, and has cemented her space in the Hindi film industry with multiple releases and commercial success. The actress considers it her strength that she is an "outsider" in the industry. Asked how she deals with the 'outsider' tag, Taapsee told IANS here: "Yes, I am an outsider and I don't see it as a bad thing. I am a happy outsider. I am not popular among the creme of our fraternity, and when I am not shooting, I travel and observe people who have a regular life, out of the film world.

"I think it is my strength that I am an outsider who can bring a lot of real elements in the performance because of a normal life. Also, I go to bed early and wake up early, so partying late night does not suit my lifestyle... I am in a happy space, really."

Last year, Taapsee had four Bollywood releases including Mulk, Manmarziyaan and one Telugu film Neevevaro. This year, after Game Over, she has Mission Mangal and Saand Ki Aankh. Recently, she gifted herself a new apartment in Mumbai.

How does she look at the success?

"It was on my bucket list that I want my own car, an apartment and a steady career by the time I am 30 years old. So thankfully I have managed to fulfil all of it. Now, I have a bigger milestone to achieve in which producers will not stop themselves to invest money in my films thinking it is an 'unconventional' and 'female-centric' film," shared the Pink actor.

"I know it is a success-driven industry but I also know that if I keep delivering content-driven films that are commercially successful, change is bound to happen... it will happen and I can see it," Taapsee asserted.

Directed by Ashwin Saravanan, Game Over is releasing on June 14 in Tamil, Telugu and Hindi. Explaining the need to release the film in multiple languages, Taapsee said: "If we look at the story, it is a journey of a girl who is a rape victim... It is a universal story and that incident can happen to anyone, in any part of the world. So the makers thought that the film deserved to be shown nationwide. Of course, it was my wish too."

Taapsee's last release Badlahad done well commercially, but it did not have enough buzz on social media, especially among the film fraternity. It is also something that megastar Amitabh Bachchan had pointed out.

Asked if such things affect her, Taapsee said, "Look, you are talking about the Twitter buzz from the verified account. The fact of the matter is, they are not the people who will make my film earn money at the box office. If a film is running in the theatre for weeks, that means people are watching it and word of mouth works as the best buzz. Then why should I complain?

"I want appreciation from the audience and by making the film survive in the theatre for weeks, they have given me validation. It was a silent success."

Is working with Bollywood's Khans on her wish-list?

"As an actress, I would love to do so... As a kid, I have grown up watching their films, but I cannot choose one favourite. I loved watching Salman Khan because of his larger than life persona, Shah Rukh Khan and romance... Any young girl would dream to have a boyfriend like Rahul. I love watching Aamir Khan because he is a very interesting actor.

"Initially I waited for long to get an offer opposite any one of them, but since I did not get a chance, I explored the opportunities that came my way so that I can make my space here in the film industry."