Taapsee Pannu Goes Back To School In This Throwback Pic 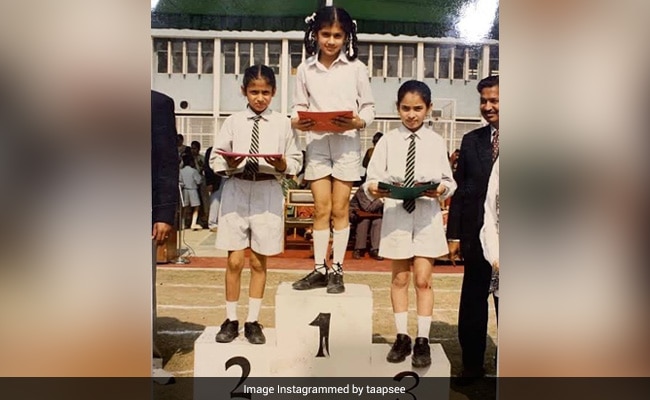 Taapsee Pannu shared a "major throwback" picture from her school days on Saturday. She looks cute as a button, standing at the number one position holding her prize along with other schoolmates. By her caption, it is clear that this picture was from a sports competition where Taapsee secured the first place. She added the hashtags #CantKeepCalm #OnYourMarks. Within a few hours, the picture garnered more than 315,897 likes. Ayushmann Khurrana's wife Tahira Kashyap couldn't stop herself from commenting and she wrote, "So sweet". In fact, Taapsee's sister Shagun Pannu also commented on the post, "And I was in the drill cheering for you".

Taapsee's latest release Annabelle Sethupathi is a horror comedy. The story is about a king which is played by Vijay Sethupathi, who built a castle in the 1940s for his lover Annabelle (Taapsee). Taapsee shared the big announcement with a post and wrote, "Us entering the release week be like...... #AnnabelleSethupathy streaming on DisneyPlus Hotstar from 17th September. Come visit our world with your family this festival season!"

Taapsee made her Bollywood debut with David Dhawan's, Chashme Baddoor in 2013. She rose to fame in 2016 with the commercially successful courtroom drama, Pink. Since then, Taapsee Pannu has been unstoppable as she went on to act in many movies such as Judwaa 2, Soorma, Manmarziyaan, Badla, Saand Ki Aankh, Thappad and Haseen Dillruba.