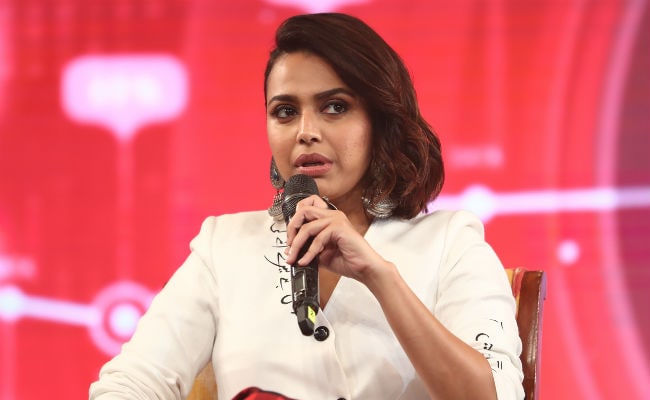 Actress Swara Bhasker spoke a length on how she deals with social media trolling at NDTV Yuva Conclave in New Delhi, where she was joined by former Indian cricketer Mohammad Kaif, fashion designer Rina Dhaka, singer Dhvani Bhanushali, artist Kusha Kapila and communication consultant Dilip Cherian. The session, which was titled 'Digital Influencers: Heroes or Villains?' was moderated by NDTV's Rajiv Makhni. Asked about how normal people (non-celebs) have become so popular on social media, Swara said, "Social media shows us how much important public opinion is. And all voices are equally important here, irrespective of your celebs status."

Does Swara ignores the trolls? The actress said she does, but there are many. "I do ignore them. But there are some aam trolls and some khaas trolls. Vo bahot Khaas roop se nafrati hain," she quipped. Swara also said that her friend has named her 'nafrati chintu. "In my list of follower, there are a lot of 'nafrati chintus, men and women both."

"A president will hear a troll's abuse as loudly as a troll will hear a president's message," Swara Bhasker added.

Giving her inputs on the discussion, singer Dhvani Bhanushali, who recently sung the reprised version of Dilbar, said that through social media you can communicate well as compared to previous times when there was only physical medium.

Meantime, Swara Bhasker also revealed she earlier used to abstain from social media but then, she was told to join the medium to interact with fans. "It was after Raanjhanaa that my PR suggested I should take to social media. But I never thought it would all get this big," she said, adding, "I have never looked at social media as a way to make money."

Swara Bhasker was last seen in Veere Di Wedding, after which she was severely trolled for a particular scene from the film. Anaarkali of Aarah, Nil Battey Sannata and Prem Ratan Dhan Payo are some of the films on her resume.