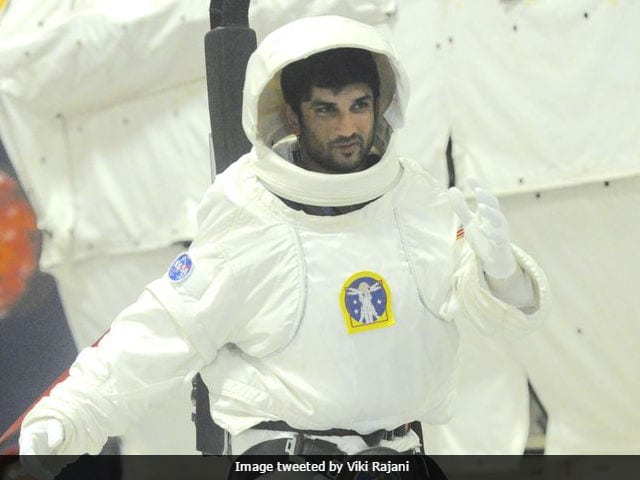 New Delhi: Sushant Singh Rajput looks like he's having a gala time enacting the role of an astronaut, which he'll play in upcoming film Chanda Mama Door Ke. Producer Viki Rajani shared a picture of Sushant dressed as an astronaut training in USA-based premier aeronautics institute NASA. Viki Rajani wrote in caption that Chanda Mama Door Ke is the first Bollywood film to "ever visit NASA for training." However, it was Shah Rukh Khan's (whom Sushant idolizes) Swades, which was the first Bollywood film to reach NASA. SRK played the role of a researcher at NASA in the Ashutosh Gowariker-directed film, which was shot inside the NASA research center.

Back to Sushant, take a look at the MS Dhoni: The Untold Story actor training for the role of an astronaut for Chanda Mama Door Ke:

Last month, Sushant had shared a picture from NASA, in which he was seated inside a 'life size' rocket. The actor wrote: "From a miniature Rocket to a life size one. This grown up kid will never cease to dream. My mother always wanted her 'Sushant in Space'." Result was simple - #SushantinSpace trended all day.

Promoted
Listen to the latest songs, only on JioSaavn.com
Sushant co-stars in Chanda Mama Door Ke with Nawazuddin Siddiqui and R Madhavan. Nawazuddin is awaiting the release of Babumoshai Bandookbaaz and is filming Nandita Das' Manto. Nawazuddin also plays an astronaut in the film and will join the shoot after completing his other projects.

Madhavan, who was recently seen in Vikram Vedha, will play the role of a test pilot in the film directed by Sanjay Puran Singh Chauhan.