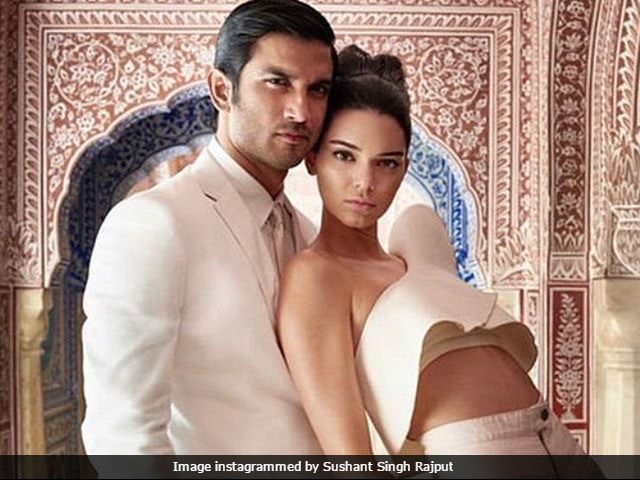 New Delhi: Actor Sushant Singh Rajput features in a special edition of Vogue India with model, television personality Kendall Jenner. The Raabta actor shared an Instagram post from the photoshoot. Sushant, dressed in a white suit, finished out his look with a sleek hairdo while Kendall complemented the MS Dhoni: The Untold Story actor in a white ensemble. Kendall Jenner and Sushant Singh Rajput collaborated for this photoshoot in February, in Jaipur. A palace backdrop is in contrast with Sushant and Kendall's contemporary look. The photoshoot was headed by acclaimed celebrity photographer Mario Testino. He shared a video on Instagram and wrote: "I am very thankful for the opportunity."

Take a look at Sushant Singh Rajput and Kendall Jenner picture for Vogue:

More pictures from the special issue shared by Mario Testino:

Kendall Jenner covers the May issue of the magazine, which is also Vogue's 10th anniversary collector's edition. Here's another shot of Kendall:


Sushant Singh Rajput is best known for films like Kai Po Che and Detective Byomkesh Bakshy!. Sushant played the lead role in television show Pavitra Rishta from 2009-2011 before making his Bollywood debut in Abhishek Kapoor's Kai Po Che, which was an adaptation of Chetan Bhagat's The 3 Mistakes Of My Life.

Promoted
Listen to the latest songs, only on JioSaavn.com
Sushant is awaiting the release of Raabta and will also be seen in Tarun Mansukhani's Drive, which is produced by Karan Johar and also stars Jacqueline Fernandez. Sushant has also started preparing for the role of an astronaut in Chanda Mama Door Ke, co-starring Nawazuddin Siddiqui and R Madhavan.

Tell us what you think about Sushant Singh Rajput and Kendall Jenner's photoshoot in the comments section.