The mother of three happily posed for the lens as she enjoyed her ride on a bicycle in Mumbai. 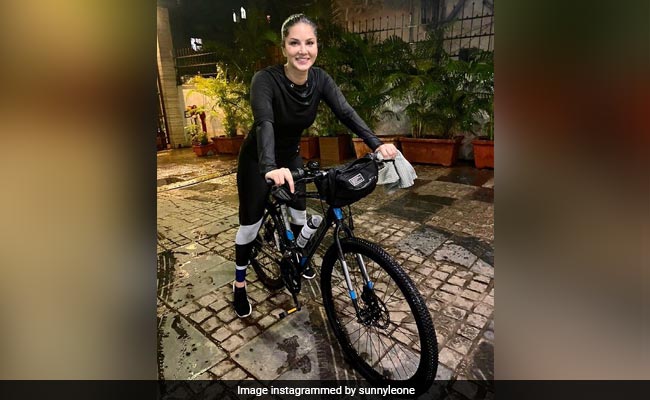 Sunny Leone's weekend plans included cycling in the rain. The actress shared a couple of pictures and video on Instagram from this sporty session. She was captured in an all-black outfit. The mother of three happily posed for the lens as she enjoyed her ride on a bicycle in Mumbai. Sunny Leone added a cheeky caption to the series, “Catch me if you can.” In the clip, we can see her chatting with her husband Daniel Weber and the camera persons on the drenched streets of the maximum city. For background music, Sunny Leone picked the song Kabhi Jo Badal Barse for her film Jackpot.

The actress often shares behind-the-scenes glimpses from her work diaries. In one of the recent posts, we can see her stunning silhouette image. Sunny Leone dropped an inspirational caption, “Dream it. Then own it.”

In another goofy social media post, she uploaded a BTS clip from the sets of her upcoming film Anamika. Sunny Leone, in a grey jumpsuit, was captured lying on a  floor. We can see her singing and chatting with the crew members. As for the caption, the actress wrote, “Relaxing on the job.” Anamika is a web- series directed by Vikram Bhatt. It marks Sunny Leone's debut in the digital space.

Don't miss Sunny Leone's post dedicated to hot yoga. The 40-year-old social media sensation shared a video while performing the exercises. She looks stunning in a green tank top and grey tights. The actress added in the side note, “hot yoga for life.” She further explained, “By the way, I'm working on my balance! Lol! Things can't always look perfect.”

Sunny Leone will be next seen in films like The Battle Of Bheema Koregaon and Shero.