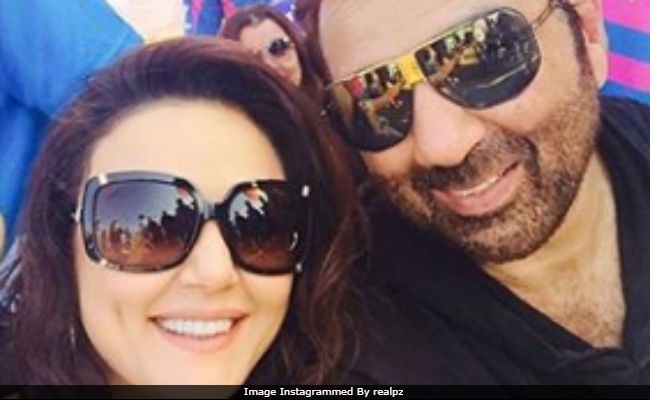 New Delhi: Finally, Sunny Deol and Preity Zinta's much-delayed film Bhaiyyaji Superhitt, has got a release date. mid-day reports that the film, which was earlier expected to release during Eid this year, will now hit the screens on September 14. Apart from Sunny Deol and Preity Zinta, Arshad Warsi, Shreyas Talpade and Ameesha Patel are also part of Bhaiyyaji Superhitt. In the film, Sunny Deol reportedly plays a gangster, who aspires to be an actor. "The film has some high-octane action stunts. I will be seen in a double role. The characters are not twins, they merely look alike. I hope the audience likes what I have attempted," Sunny Deol told mid-day.

In January, Mumbai Mirror reported that Preity Zinta and Sunny Deol will be filming a special song in Mumbai for the film. Bhaiyyaji Superhitt was announced seven years ago and Preity shot the last schedule of the film in April 2016. The duo will share screen space after 15 years. They last featured together in the 2003 film The Hero: Love Story of A Spy.

Promoted
Listen to the latest songs, only on JioSaavn.com
Meanwhile, Bhaiyyaji Superhitt will be Ameesha's second film with Sunny Deol, after Gadar: Ek Prem Katha.

Preity Zinta shot for the film right after her marriage in 2016. She had not made any screen appearance after 2013's Ishkq in Paris. Sunny Deol was last seen in 2017's Poster Boys, in which his brother Bobby Deol was one of his co-stars. He is currently busy with his son Karan's debut Bollywood film Pal Pal Dil Ke Paas.