"I am so grateful that we are spending some time together," said Ekta 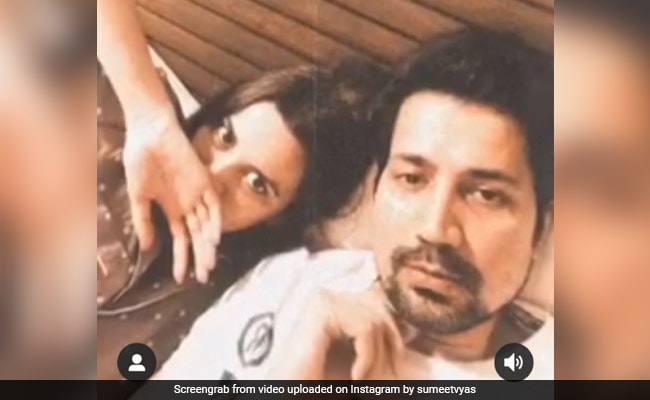 Ekta and Sumeet in the video. (Image courtesy: sumeetvyas)

Contrary to what Summet Vyas wrote in his caption, his latest Instagram entry is just too sweet. The actor shared a video along with his wife and actress Ekta Kaul, who is expecting her first child. In the video, Sumeet adorably asked Ekta: "How is quarantine treating you?" To which, she replied: "Very well, I am so grateful that we are spending some time together." Later, when Sumeet asked her: "Are you enjoying spending this much time with me?" The actress kept quiet. Sumeet's Tripling co-star Amol Parashar commented on the video. He wrote: Hahah."

Sumeet Vyas and Ekta Kaul got married in September 2018, in Jammu (which is Ekta Kaul's hometown). Earlier this month, the couple announced their pregnancy in the sweetest possible way on social media. Sharing the family picture, Ekta wrote, "Proudly announcing our new project together. Introducing Jr. KaulVyas (soon)" She added, "Created, directed and produced by us, Sumeet Vyas and I."

ICYMI, take a look at the aforementioned post here:

Proudly announcing our new project together. Introducing Jr. KaulVyas (soon) Created, Directed and Produced by US.... @sumeetvyas and I

Sumeet Vyas starred in Veere Di Wedding, alongside Kareena Kapoor, Sonam Kapoor, Swara Bhasker and Shikha Talsania. He is best-known for his performance in TVF's web-series Tripling, Tripling 2 and Permanent Roommates. Sumeet has also featured in Bollywood films such as English Vinglish and Highjack.