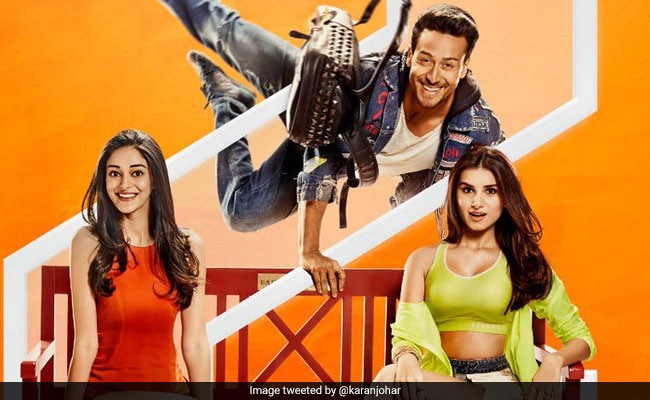 The trailer of Student Of The Year 2 released on Friday, ahead of which the film's primary characters with three brand new posters of Tara Sutaria, Ananya Panday and Tiger Shroff were introduced. Within minutes of the posters being dropped, the Internet made an observation (which all of us did too) and asked out loud: "Where in India do we have schools where students wear a dress like this?" - read tweet while another added: "Is it a school for education or a school for branding?" Just a correction here - which the last movie was set in a school, this one is actually a college drama. Meanwhile, of the three students, netizens particularly got talking about Tara Sutaria's "uniform". In one of the poster, she can be seen sporting a pink bra-let and a pair of Calvin Klein metallic shorts. Ananya Panday sports a more spunky look in a sequined crop top paired with white shorts.

Ready to create a storm in St. Teresa, introducing the gorgeous #Tara as Mia! #SOTY2TrailerTomorrow@iTIGERSHROFF#Ananya@punitdmalhotra@apoorvamehta18@DharmaMovies@foxstarhindi@ZeeMusicCompany@SOTYOfficialpic.twitter.com/BU87k1YkKl

Jumping her way into your hearts!!Presenting #Ananya as Shreya! #SOTY2TrailerTomorrow@apoorvamehta18@iTIGERSHROFF#Tara@punitdmalhotra@DharmaMovies@foxstarhindi@ZeeMusicCompany@SOTYOfficialpic.twitter.com/zCZcv0O7yy

HE'S READY, THE NEW STUDENT ON THE BLOCK! But there's more to come, stay tuned! #SOTY2@iTIGERSHROFF#Tara#Ananya@punitdmalhotra@apoorvamehta18@DharmaMovies@foxstarhindi@ZeeMusicCompany@SOTYOfficialpic.twitter.com/yOjHI9GkfP

Here's just a glimpse of how the Internet reacted to the new posters.

A film from fantasy land. A life that no college student has ever lived.
Just hope you haven't ruined talented @iTIGERSHROFF in this flick coz I think he deserves even better. But in the end its KJo's film so something good will always be there..

It only happens in Dharma productions colleges, otherwise she would have been fined had she would've been studying in a normal Indian College for wearing such dress.

Where the hell in India do we have schools where students wears a dress like this?

V r in INDIA Karan. Which college has this kind of dress code?
Nothing has changed about dress sense from K2H2 to SOTY2.
From Miss Braganza 2 this, all r in same type of dress.
Bt new College of Karan is coming vth its new student life.

Looks like this is @karanjohar's private school .. Nice uniform

@dharmaMovies@karanjohar is it a school for education or school for branding?

Similar thoughts were evoked when the first posters of Student Of The Year 2 were introduced earlier - Tara Sutaria's college wardrobe included crop top and denim shorts while Ananya Panday's college wardrobe picks were a bra-let paired with athleisure.

...And suddenly you know it's time to trust the magic of new beginnings! Firsts are always special, especially when you're blessed enough to be a part of the Dharma family. My journey begins... #SOTY2 #Repost @dharmamovies with @get_repost We are proud to present the new admission to the class of 2018, the girl who is in it to win it - @tarasutaria__ ! #SOTY2 @tigerjackieshroff @karanjohar @apoorva1972 @punitdmalhotra @foxstarhindii

On Friday afternoon, the Student Of The Year 2 trailer began trending within minutes of being released. Tiger Shroff plays an all-rounder and diligent student named Rohan while Ananya Panday has been cast as a bully named Shreya. Tara Sutaria features as a competitive student named Mia who wants to be the winner of a dance competition.

Directed by Punit Malhotra, Student Of The Year 2 hits screens on May 10.

Comments
The Students Of The Year 2students uniforms