"I believe this moment in our lives will finally be a memory of when we had all the time on our hands," wrote SRK 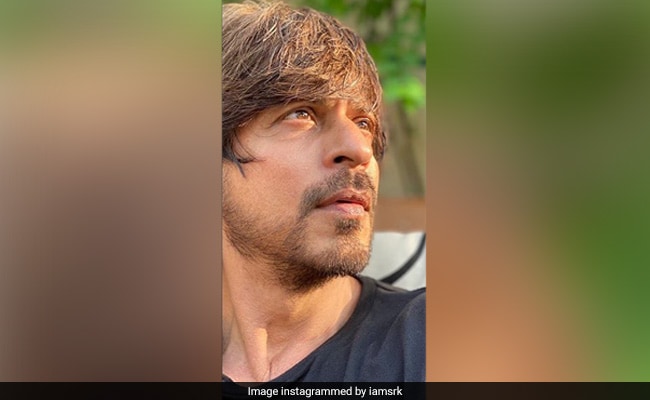 Shah Rukh Khan, who recently made headlines for the initiatives and the donations he made to the relief funds aimed at combating coronavirus in the country, dropped another post on his Instagram profile on Sunday. Sharing a selfie of himself, the Kuch Kuch Hota Hain actor wrote a thoughtful caption: "I believe this moment in our lives will finally be a memory of when we had all the time on our hands and our loved ones in our arms. Here's wishing this for everyone." Adding to his caption, he explained the dos and don'ts to be followed so as to not fall prey to the coronavirus - he wrote, "Stay Safe. Stay Distant. Stay Healthy." In the post-script of his caption, the 54-year-old actor explained why he decided to post the message with the selfie and it seems, "the sefie has nothing to do with the message". He wrote, "The selfie has nothing to do with the message, thought I look good, so I sneaked it in." Take a look at the post made by SRK here:

I believe this moment in our lives will finally be a memory of when we had all the time on our hands & our loved ones in our arms. Here's wishing this for every1. Stay Safe.Stay Distant.Stay Healthy. PS:The selfie has nothing to do with the msg, thought I look good, so I sneaked it in

Shah Rukh Khan has also offered his and Gauri's personal office to be turned into a quarantine facility in Mumbai. On Saturday morning, the official Twitter handle of BMC (Brihanmumbai Municipal Corporation) tweeted the news and thanked both Shah Rukh and his wife Gauri Khan for the gesture. "Stronger together. We thank Shah Rukh Khan and Gauri Khan for offering their 4-storey personal office space to help expand our quarantine capacity equipped with essentials for quarantined children, women and elderly. Indeed a thoughtful and timely gesture! Anything for Mumbai. Na to corona!" read BMC's tweet, which was re-shared by SRK's Red Chillies Entertainment. Last year, Shah Rukh received an honorary Doctorate from University Of Law, London for philanthropy.

Earlier this week, the 54-year-old actor pledged his donation to four relief funds including Prime Minister's Citizen Assistance and Relief in Emergency Situations Fund (PM-CARES), Maharashtra Chief Minister's Relief Fund, Ek Saath - The Earth Foundation and Roti Foundation. SRK, who is also the Brand Ambassador of West Bengal, announced several initiatives that include supporting the healthcare providers of West Bengal and Maharashtra with 50,000 Personal Protective Equipment (PPE) kits, providing daily food requirements for at least 5500 families in Mumbai for at least a month, providing 3 lakh meal kits to at least 10,000 people per day, providing basic essentials and daily items to at least 2500 daily wage workers in Delhi and providing a monthly stipend to over 100 acid attack survivors. "Let's just make sure we all do our little bit to look after each other," SRK wrote in his post.

In these times it's imp to make everyone around u working tirelessly for u.. not related to u.. perhaps even unknown to u... to feel they are not alone and by themselves. Let's just make sure we all do our little bit to look after each other. India and all Indians are One Family. Stay Safe Stay Healthy and don't forget to pray. @narendramodi #PMOIndia @uddhavthackeray @Adityathackeray @mamataofficial @arvindkejriwal @RedChilliesEnt @redchillies.vfx @kkriders @MeerFoundationofficial @rotibankfdn #WorkingPeoplesCharter @Eksaathfoundation @pragyakapoor_