"It picks right up where The Force Awakens ends and he has had a kind of crisis of faith and it's yet to be seen if it redoubles his efforts about what he is trying to do or does it change directions and make him do something that's completely different," said Adam Driver 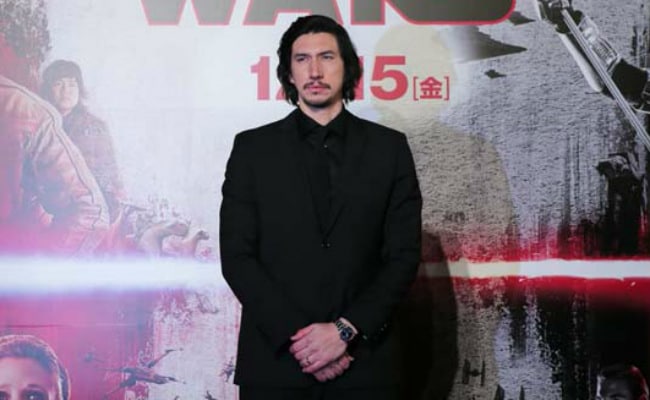 Tokyo: Man of few words Adam Driver, who reprises his role as Kylo Ren in Star Wars: The Last Jedi, knows how to keep secrets. Ask him any question about the upcoming movie - releasing this Christmas - and you will barely get any information. He keeps a tight lid on the big secrets of the plot. NDTV sat the 33-year-old actor down for a chat in Tokyo after the red carpet premiere of the film and did manage to prise some gen out of him. He wouldn't tell us if Kylo Ren has had a change of heart after killing his father, Han Solo, but he did open up about how he deals with fans showing up at his house, handing out lightsabres to kids dressed as him on Halloween, and what being on a Star Wars set is really like. Star Wars: The Last Jedi co-stars Mark Hamill, Daisy Ridley, John Boyega and Oscar Isaac.

Q: A lot of people dress up as Kylo Ren for Halloween, how do you react to that?

Adam Driver: If they would dress up as Kylo Ren for Christmas that would be interesting. It's great fun for me. In my building, there are a lot of kids so I supply them with lightsabres and masks so that they can be evil to their parents.

Q: Will Kylo Ren have a back-story in The Last Jedi?

Adam Driver: I don't want to give out the story or anything but it picks right up where The Force Awakens ends and he has had a kind of crisis of faith and it's yet to be seen if it redoubles his efforts about what he is trying to do or does it change directions and make him do something that's completely different.

Q: We hear you were always in character on the sets of the film, is that true?

Adam Driver: That's not entirely true, sometimes I am and sometimes I am not, it depends on that day. The Star Wars that you see is an action adventure family drama but on the sets, it's pure comedy, with Stormtroopers trying to find out how to go to the bathroom and the puppets not working and giving everyone the finger, it's hilarious. Sometimes it's hard to stay focused.

Q: You don't watch your own movies; did you make an exception for The Last Jedi?

Adam Driver: Yes, I saw it a couple of weeks ago. I typically try not to watch everything because I know what was going on when we were shooting it but apart from that I don't find it helpful in a lot of ways. It makes you more self-cautious and aware that someone is watching it. I would like to be there for the people I am acting with and not just trying hard to make it look good or perfect just trying to be available but for something like this that's so huge, the visual part is missing when you are shooting it. On the sets, I hear voices behind me that say things like, 'Trust us there is space is behind you' or 'trust us your lightsaber is working'. So there was a visual element that I was missing so I wanted to watch it for that. And it's interesting watching yourself, the movies are great (smiles). What Rian has done this time is something that's never seen a Star Wars movie before, which is exciting.

Q: How are you adjusting to the fame and adulation that you get from Star Wars fans?

Adam Driver: I haven't found a way to process it, I haven't given it much thought. Other than the fact it affects your anonymity and it affects your plan before you go anywhere. I don't enjoy a lot of attention and it's not a natural part of being in the world. It's counter to my job, my job is to be anonymous and to make mistakes and live life where I should observe and not be observed. When you are observed it's a weird calibration.

Q: You said you don't enjoy a lot of attention but fans must be expecting a lot from you every time they see you somewhere, how do you balance that and not upset them and be comfortable at the same time?

Adam Driver: You have to set boundaries. If it's children, I love it. Star Wars is a cross-generational thing so families sit down together to watch Star Wars. For me, that's moving. I didn't anticipate when I took up this job, it's a reward. But if someone shows up at your house you can get more aggressive. On the whole, I try to stay on my own as much as possible. I live in a very quiet neighborhood, so you just have to structure your life differently but it's all good. The alternative to that would have been bad, something like every time they see you they throw food at you. It's better when it's nice.

Q: Does the Star Wars movie come with a lot of baggage?

Adam Driver: For me, I don't think of it as a Star Wars movie. This one I had more time to sit back and appreciate the scale of it, for the last one I didn't get time to look at it that way because I was so petrified. But you do your best and not to think of it as a Star Wars movie. You don't take the Star Wars iconography and sit back and be like, 'Oh it's a Star Wars movie and there are lightsabers and helmets and ships flying around. You have to break it into pieces and solve one piece at a time. You have to understand why is he is wearing a helmet? Who is he hiding from? Why are the lightsabers like this? I focus on little things. I also don't think like, 'Oh, there is Mark Hamill here,' that helps me make it as real as possible. I block the big parts as much as possible.

Q: Did you get any advice from Rian Johnson or anyone else for this part?

Adam Driver: No, there are no people who will sit you down and tell you what to do but if anything, I learned by example. There was never a time they sat us down.

Adam Driver: I don't look at him like a bad guy. I do not know what being pure evil is, maybe something that doesn't sustain itself, I thought of him as he is a good guy in his world. I thought of him, as what he is doing is right as opposed to what he is doing is evil. People that I know who think they are right or they are morally justified and can't hear another side because there is no limit to what they will do till their agenda is pushed and to me, that's more scary and unpredictable.

Q: Do friends and family try to find out from you what's happening in the next episode?

Adam Driver: Not at all. During the first one they asked a little bit about it but true fans of the movies don't want to know that, they want to experience on their own on the big screen in a dark room with strangers, just the way I would want them to.

Q: Is there some love interest between Kylo and Rey?