Star Screen Awards 2019: Deepika Padukone And Kartik Aaryan's Dheeme Dheeme Showtime. So, How Did They Do?

Star Screen Awards 2019: Deepika Padukone and Kartik Aaryan ruled the stage and how 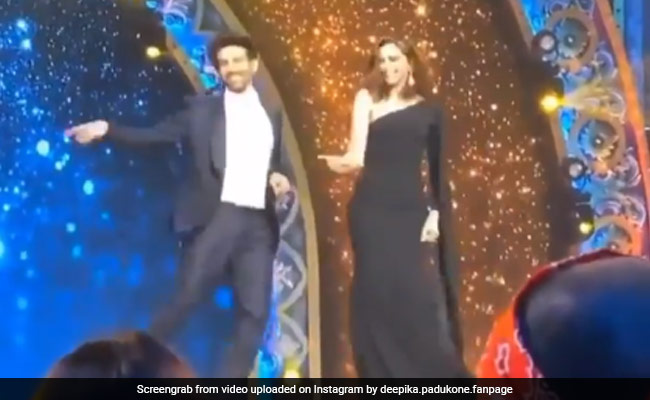 Deepika and Kartik in a still from the video. (Image courtesy: deepika.padukone.fanpage )

Just when we thought Deepika Padukone and Kartik Aaryan's dance sessions couldn't get any better, the actors decided to surprise us with their amazing performance at the Star Screen Awards, which was held in Mumbai on Sunday night. A video from last night's award ceremony, in which the actors can be seen dancing to the song Dheeme Dheeme from Kartik Aaryan's recently released film Pati Patni Aur Woh, has been going insanely viral on social media. In the video, Deepika can be seen dressed in a black Alex Perry gown and Kartik can be seen wearing a tuxedo.

This is not the first time that Deepika and Kartik amazed us with their dance performance. Earlier this month, the duo performed at the Mumbai airport. It all began when an enthusiastic Deepika asked Kartik to give her dance lessons on the song because she wanted to take part in the Dheeme Dheeme Challenge. Responding to Deepika's request, Kartik said, "Ji, zarur. Aap jaldi pick kar lengi... bataiye kab." After the dance lessons, Deepika thanked Kartik and she wrote in her Instagram story: "Thank you Kartik Aaryan for your warmth and enthusiasm."

Here are the photos and videos from the sessions:

#DheemeDheemeChallenge has reached d next level @deepikapadukone Too much fun