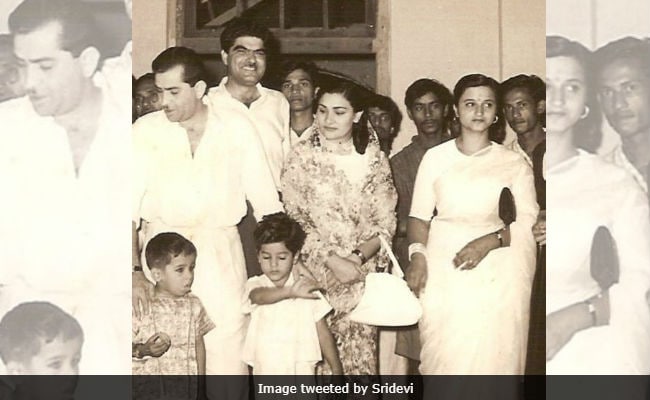 New Delhi: On Raj Kapoor's 93rd birth anniversary, actress Sridevi shared a gem of a throwback picture featuring the legendary actor with her husband Boney Kapoor, who was all of four at that time. Boney Kapoor's father Surinder Kapoor, who is also in the photograph, was Raj Kapoor's actor father Prithviraj Kapoor's first cousin. In the throwback picture shared by Sridevi, Boney Kapoor accompanied his father to a film set for the first time. She captioned the picture: "The first muharat and visit to a studio by Boney Kapoor (the kid in white) in 1959. Also in the picture Raj Kapoor ji, Krishna ji, my father-in-law Surinder Kapoor and mother-in-law."

The first muharat and visit to a studio by @BoneyKapoor (The kid in white) in 1959. Also in the picture Raj Kapoor ji, Krishna ji, my father in law Surinder Kapoor and mother in law. pic.twitter.com/XfXrWS9lq6

Surinder Kapoor came to Mumbai (then Bombay) at Prithviraj Kapoor's behest and started his career as a secretary to actress Geeta Bali. Later, he became a producer and the first film of his S.K.International Films was Shehzada , starring Rajesh Khanna. He also produced his cousin's grandson Rishi Kapoor in Phool Khile Hain Gulshan Gulshan and Randhir Kapoor in Ponga Pandit.

Sridevi, who was last seen in MOM, hasn't announced her next film yet. Sridevi and Boney Kapoor's elder daughter Janhvi is gearing up for her Bollywood debut, titled Dhadak.