"I was an under-confident kid. My teachers didn't even know my name," said Sooraj 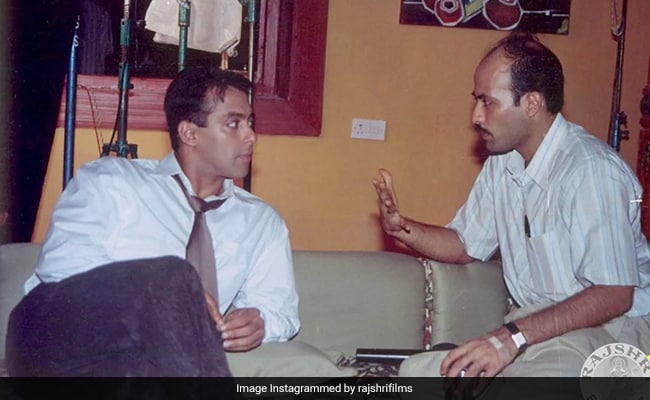 Sooraj Barjatya, known for films like Maine Pyar Kiya, Hum Saath Sath Hai, Hum Apke Hai Kaun and Vivah among others, recently revealed that no actor wanted to work with him, when he wrote Maine Pyar Kiya and how his father was not sure of his decision of becoming a director as he was an under-confident kid, who sat alone in class. The filmmaker also revealed how he cast Salman Khan five months after rejecting him during his first screen test.

Speaking to Humans Of Bombay, Sooraj Barjatya said, "Hum Aapke Hain Koun, Hum Saath Saath Hain, Vivah-you know what all my films have in common? Family! Because when I started out, Dad said, 'Take inspiration from your life.' And what I held closest was my family. Dad was a film distributor and producer; I wanted to do what he did."<

He added, "But I was 17 when I noticed a person 'directing'-he knew the correct camera angle and even what the set should look like. I was mesmerized and decided, 'I'll become a director, too.' But Dad wasn't sure-I was an under-confident kid. I'd sit alone in class, never partake in activities; my teachers didn't even know my name! So Dad's, 'How will you manage?' made sense."

However, Sooraj Barjatya, an "under-confident" kid then knew what he wanted to do. He said, "But it was the 1st time I'd felt strongly about something. My heart said, 'Just take the plunge' and so, instead of going to college, at 19, I began assisting Mahesh Bhatt on Saransh. I started on 1st January, 1984-that new year brought along a 'new' Sooraj. And right from delivering scripts to the actors to helping with the set up, I did everything! After Saransh, I worked as an assistant on other films. Working with big directors made me want to do something of my own. And so, at 21, I began writing Maine Pyar Kiya. But let me tell you a fun fact-the 1st script got rejected & it took me 2 years to write a new one!"

Sooraj revealed how after he finished writing the script of Maine Pyar Kiya, no actor wanted to work with him and how he ended up casting Salman Khan, who he first had rejected after his first screen test.

He said, "But the journey was daunting-at Rajshri, our production house, our last few films were a flop and we were suffering financially. No actor wanted to work with us. And then one day, I met a young man who we'd rejected after his first screen test. But there was something about him. So, 5 months later, we got him on board. That man was Salman Khan. The script was ready and so was the cast, but there was no money. But we knew the film would work. So, Dad borrowed. The shoot began & we know what happened then-it became an iconic film!"

Sooraj Barjatya's latest film Uunchai, which too is based on friendship, starring Amitabh Bachchan, Boman Irani, Anupam Kher, Parineeti Chopra, Neena Gupta and Sarika in the lead roles, released in theaters on November 11.