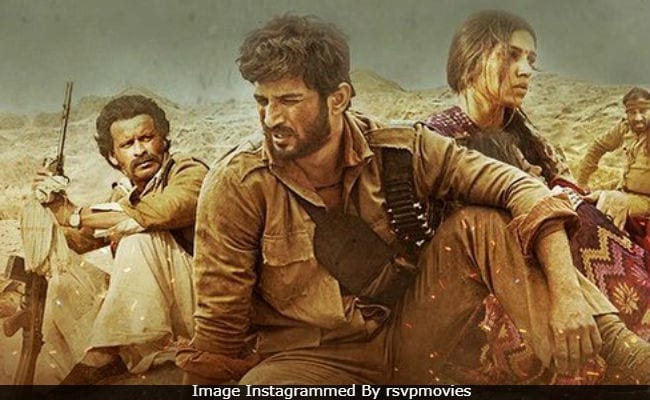 Director and co-writer Abhishek Chaubey, working with a superb screenplay by Sudip Sharma and aided by first-rate camerawork (Anuj Rakesh Dhawan), editing (Meghna Sen), sound design and background score (Bendict Taylor and Naren Chandavarkar), crafts a disturbing, unvarnished cinematic portrait of violence and its repercussions in Sonchiriya, an immersive dacoit drama set in the harsh, dusty ravines of Chambal in the 1970s. The film completely upends the conventions of the genre. It draws the themes of crime and retribution, caste and gender, despair and redemption into the near-mythic, overarching sweep of the narrative.

The actors at Chaubey's disposal - the known ones (Manoj Bajpayee, Sushant Singh Rajput, Bhumi Pednekar, Ashutosh Rana, Ranvir Shorey) and the not-so-known ones (Jatin Sarna, Harish Khanna, Sanjay Shrivastava, seasoned theatre actors all) - merge themselves so seamlessly with the milieu of this shot-on-actual-locations saga that they do not seem to be performing for the camera but actually living and breathing the parts. It is an astoundingly unblemished ensemble show. 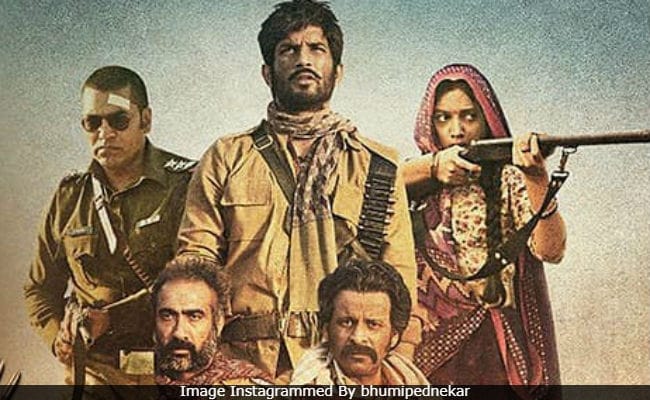 Bajpayee's is a class act yet again, Rana smoulders with intent, Shorey is fire and brimstone, Rajput exudes anguish and determination in equal measure and Pednekar claims her space in the male-dominated cast and forbidding setting with a measured turn that evokes life-affirming, ennobling compassion.

The outlaws that this film is about aren't glamorised fugitives riding around on sturdy stallions like knights in shining armour. They survive on frugal meals and their weapons are at best merely functional. In one scene, an arms smuggler offers them better weapons - Rs 35,000 for one and Rs 60,000 for two, remember that the period is the mid-1970s - but the chief of the dreaded gang of Thakurs is too strapped for cash to go for the deal.

His men are deeply conflicted individuals who have rebelled against a society that has cast them aside - they repeatedly talk about their sorry plight and, in their softer moments, allow themselves to dream of normalcy after they have surrendered and served their prison terms - and inevitably have to grapple with the moral dilemmas that attend violence and its aftermath. Memories of an involuntary bloodbath that they caused in a Gujjar village haunts the dacoits, defining their subsequent acts of both desperation and redemption.

Sonchiriya announces its intentions even before the light goes up on the screen - the buzz of flies on the soundtrack leads us from a dark frame to an extreme close-up shot of a dead snake lying in the path of the Thakur gang. The stench of death and fear pervades this unflinching probe into the pitfalls of rebellion and maleficent masculinity that seeks blessings from a Mother Goddess - Maa Bhavani - the reigning deity of the Chambal Valley. But this is, at the same time, a place where rape and repression are rampant and women are doomed to a veiled, voiceless existence. What is instantly noteworthy about Sonchiriya is that the scalding portrait of patriarchy and prejudice that it paints, despite being set well over four decades ago, is still disquietingly relevant.

Equally interesting in this tale about guilt and expiation - here, lives have to be put on the line every day and every hour in the pursuit of self-preservation - is its strong ethical underpinning. One of the key plot points in the film pertains to the character of Man Singh (Manoj Bajpayee in an outstanding special appearance) making a fatal sortie driven purely by a call of conscience. One of his two most trusted men, Lakhan Singh (Sushant Singh Rajput), warns him of the grave perils that lie ahead. The other, Vakil Singh (Ranvir Shorey), chooses to follow his leader unquestioningly.

This daring raid by Man Singh's gang on the house of a wealthy jeweller on the wedding day of the man's daughter - it coincides with June 25, 1975, the day Emergency was promulgated in India, a fact underscored by Indira Gandhi's voice announcing the move over AIR Akashvani and the slogans on a van parked at the site propagating the Prime Minister's 20-point programme and not only asserting 'Inki ladaai hamaari ladaai' but also exhorting people not to fall prey to rumours - "dheeli baatchit se bachiye". How difficult could it be to understand this fraught situation in the times of tall claims and fake news that we live in?

Man Singh puts the timeless predicament of the dispossessed in perspective. When someone advises him to exercise caution against the police, led by an unrelenting Inspector Gujjar (Ashutosh Rana), the outlaw says: "Have government bullets ever killed anyone? The promises of politicians kill." He then mimics an electoral speech (Bhaiyon aur behnon...) as the film cuts to the next sequence.

In this universe where life hangs by a thread, even the police force operates pretty much like a criminal gang, armed with the licence to kill at will. But is it free from the malaise of caste biases that afflicts the rest of the land? Not a chance in hell. We watch two of Inspector Gujjar's subordinates talk about how demeaning it is for them, both Thakurs, to take orders from a Gujjar.

The title of the film stems from the name of a 12-year-old Dalit girl who has been brutally violated and whose well-being becomes a mission for Lakhan and a woman fleeing domestic abuse, Indumati Tomar (Bhumi Pednekar), with her husband and teenage son on her trail. As the fugitives make their way across the ravines in order to get to the nearest town where the girl can get the medical attention she needs, the film conjures up the Chambal landscape with stunning precision, an attribute enhanced by the authenticity of the Bundelkhandi dialect that the characters speak (which, in turn, necessitates the use of subtitles all through the film).

As the cadences of the language and the flashes of black humour grow on us and the sound design hems us in - the silences that intersperse the gunfire and the musical score can be 'heard', and not just felt and experienced. The fluid camerawork and lighting capture both a sense of restlessness and and an air of foreboding as much in the dank, dark closed spaces as in the sunny exterior sequences. The balladic songs (music: Vishal Bhardwaj, lyrics: Varun Grover, voices: Rekha Bhardwaj, Sukhwinder Singh, Arijit Singh) extend solid support to a fabulous fable of a flawed land that eschews easy options and sticks to its guns all the way through.