Sonam Kapoor's "joyful" video will make you smile and how 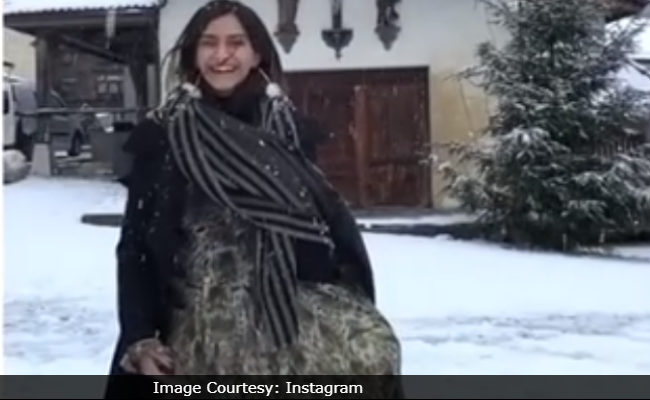 Sonam Kapoor in a still from the video.(Image courtesy:

Seems like Sonam Kapoor and Anand Ahuja are having a great time in the US and Sonam Kapoor's latest Instagram post is proof. On Tuesday night, Sonam treated her fans to a dreamy video, in which she can be seen twirling in the snow and can you guess who shot the video? No points for guessing, it was none other than Sonam's entrepreneur husband Anand Ahuja, who lovingly shot the actress as she was twirling in the snow. Sonam can be seen dressed in a grey dress and a black shrug and we must tell you that she looks simply adorable especially when she comes running towards the camera.

Look at that smile.

Sonam and Anand are often seen documenting different facets of their relationship on social media. Last week, Sonam shared a picture from California, in which the duo could be seen twinning in white outfits. This is what we are talking about:

The duo even shared pictures from their New York diaries. The one in which Anand could be seen resting his head on Sonam's shoulder.

Remember Anand Ahuja's throwback picture, which was reviewed by his lady love in the most adorable manner. Sonam commented: "My fatty."

They couldn't get any cuter.

Sonam Kapoor and Anand Ahuja got married on May 8, in a traditional Sikh ceremony.

On the work front, Sonam Kapoor was last seen in Rajkumar Hirani's Sanju, opposite Ranbir Kapoor. She will next be seen in the romantic film Ek Ladki Ko Dekha Toh Aisa Laga, in which she will be seen sharing screen space with her father Anil Kapoor. The film will open in theaters on February 1 next year.