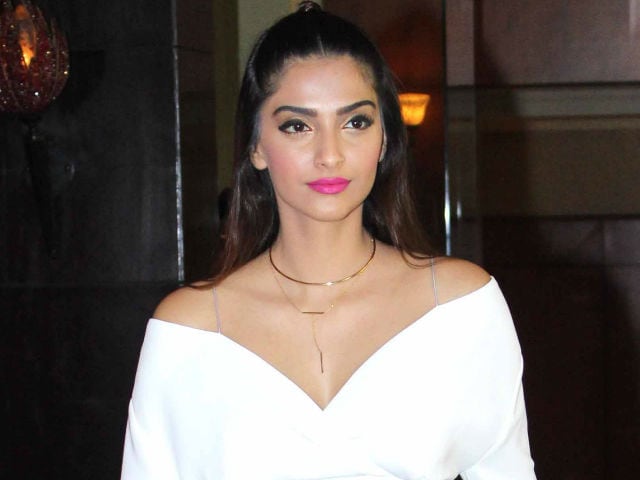 Mumbai: Actress Sonam Kapoor, who is gearing up for the 69th Cannes Film Festival, said that she doesn't get "starstruck" by other celebrities at the red carpet.

"It doesn't matter which part of the world you are from whether you are white, brown or black everybody is the same so I don't get starstruck unless I really respect the person," Sonam told IANS.

"If I meet Barbra Streisand or someone like that then I will be star struck or else just celebrities don't impress me," she added.

When asked if she gets intimidated by western stars walking the red carpet, Sonam said: "I am so tall so when I walk, it's completely different because I wear really high platform heels. So, I think it's very difficult for anyone to intimidate me because they are like so small. I don't get intimidated by people because people are just people".

The actress who has been elegantly blending the Indo-Western look at Cannes refrained from talking about her look at this year's festival. However, she said that her ensemble will have "some Indian element".

"What I will be wearing that I don't know yet. It's a secret. But I am the proudest Indian you will ever see. I love India and I love everything that's Indian, so even if I don't want an Indian designer, there will always be an inspiration. I will have some Indian element which represents India," the Neerja actress said.

The 30-year-old actress mentioned that she doesn't like to take stress before walking the red carpet.

"The very reason I started getting recognised as fashionable was that I just was out there and wore what I wanted to and people appreciated that. That's when this whole revolution of fashion started," the Prem Ratan Dhan Payo actress added.

Does she intend to take her films to Cannes some day?

"Neerja was something that we were thinking of taking to some festival but it doesn't work in terms of release. Usually, festivals want an exclusive and worldwide release for their platform and it's difficult to give it the kind of promotion. Especially, a film which is going to do well in India," Sonam said.

"I don't know if commercial films work, but yes, if there is something special then I want to take my film to the international platform and showcase it. I wish certain things change at festivals where you can showcase films which don't get a release there," she added.

Sonam who has recently launched her own app called 'Sonam Kapoor' promises that she is going to do a lot of things through that platform.

"I am going to do a lot of stuff with the app for sure everything is going to be posted on it videos, tutorials, what is happening at Cannes and a lot of promotions are going to be done through Cannes," she said.

This will be Sonam's sixth year at the Cannes Film Festival as the global brand ambassador of L'Oreal Paris. She will be seen walking the red carpet on May 15 and 16.

The 69th annual Cannes Film Festival is scheduled to be held from 11 to 22 May.