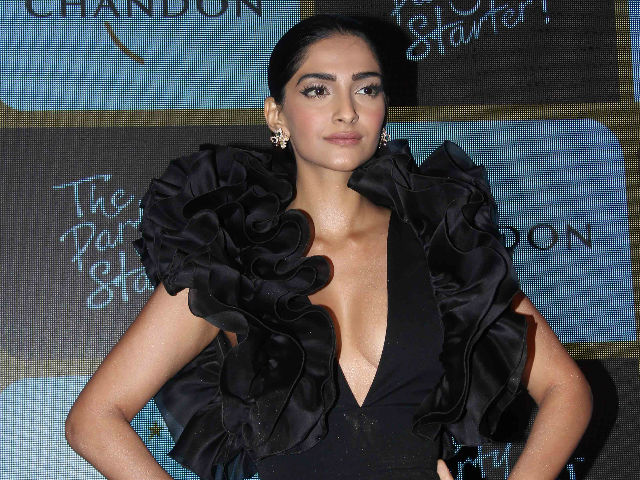 New Delhi: Actress Sonam Kapoor slammed the paparazzi for taking pictures of her from an awkward angle at a recent event in Mumbai. The 31-year old actress wore a ruffled collar Rasario Atelier jumpsuit at an event on Thursday and the shutterbugs clicked pictures of the Neerja actress from an unflattering angle which later made headlines. Sonam slammed the media outlets which assumed that she was "uncomfortable" in the couture and said on Twitter: "I was very comfortable in my outfit. I said a lot of pertinent things, but obviously you guys rather report this." Sonam Kapoor is the daughter of Bollywood actor Anil Kapoor and is lauded for her fashion avant-garde movement in Bollywood.

In a separate tweet, Sonam said: "Sexist nonsense. The photogs went out of their way to take these pics.. and frankly I don't give a damn,I'm proud of my body! (sic)"

Sonam Kapoor's understandable reaction to the headlines her pictures made was mirrored by her Bollywood colleagues like Bhoomi Pednekar and Sophie Choudry. "@sonamakapoor you look hot AF.More power to you (sic)," tweeted Bhoomi and Sonam replied: "Thanks Bhooms.. I felt hot as ****! I hope it wasn't a women writing these headlines. (sic)"

As u damn well should be hottie! Your body, your choice @sonamakapoorhttps://t.co/FxOAyedouY

Thanks soph... people are gross https://t.co/l7GR3neKdt

Promoted
Listen to the latest songs, only on JioSaavn.com
A few years ago, actress Deepika Padukone similarly shut up a leading daily for clicking her pictures from an awkward angle. Deepika posted a screenshot of the offending photo and also wrote: "Dont talk about Woman's Empowerment when YOU don't know how to RESPECT Women! (sic)"

Sonam Kapoor was last seen in 2016 film Neerja and she won Filmfare Best Actress (Critics) award for her portrayal of Neerja Bhanot. Her upcoming films are Padman directed by R Balki and co-starring Akshay Kumar and Veere Di Wedding, which is produced by her sister Rhea Kapoor and co-stars Kareena Kapoor Khan and Swara Bhaskar.