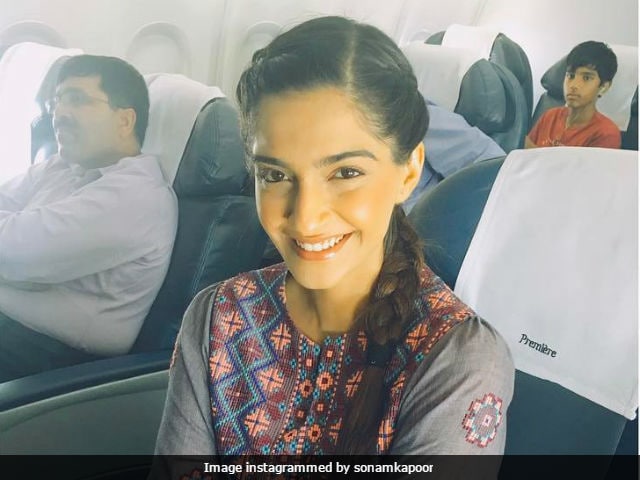 New Delhi: Actress Sonam Kapoor is headed to Indore to shoot for R Balki's film Padman, reports Mumbai Mirror. The film also features Akshay Kumar and Radhika Apte in lead roles. Earlier, reports suggested that the 31-year-old actress will be portraying the role of a journalist in the film. However, filmmaker R Balki has refuted the rumours, according to Mumbai Mirror. Padman is based on Arunachalam Muruganantham, the inventor of a low-cost sanitary pad-making machine in India. The shoot for the film began on March 14 in Indore, Madhya Pradesh. Actress turned author Twinkle Khanna will be making her debut as a producer with this film. The film is being shot at real locations, including ghats, forts and palaces.

Recently, Sonam Kapoor celebrated her mother, Sunita Kapoor's birthday in London along with family and her friends. The Khoobsurat actress was spotted partying with her sister Rhea Kapoor and rumoured boyfriend Anand Ahuja. Sunita Kapoor, who celebrated her birthday on March 25, shared a picture on Instagram, captioned: "What A Wonderful Way To Celebrate Mothers Day!"

Promoted
Listen to the latest songs, only on JioSaavn.com
Sonam Kapoor was last seen in 2016 film Neerja, directed by Ram Madhvani. The film featured Shabana Azmi, Yogendra Tiku and Shekhar Ravjaini in supporting roles. The film, which was a biopic on airhostess Neerja Bhanot, won the Raanjhanaa actress Filmfare Critics Award for Best Actress.

After Padman, Sonam Kapoor will feature in Rajkumar Hirani's film Dutt. The film is based on the life of actor Sanjay Dutt. Sonam will be portraying the role of Sanjay Dutt's love interest in the film. She will also star in Shashank Ghosh's Veere Di Wedding co-starring Kareena Kapoor and Swara Bhaskar.