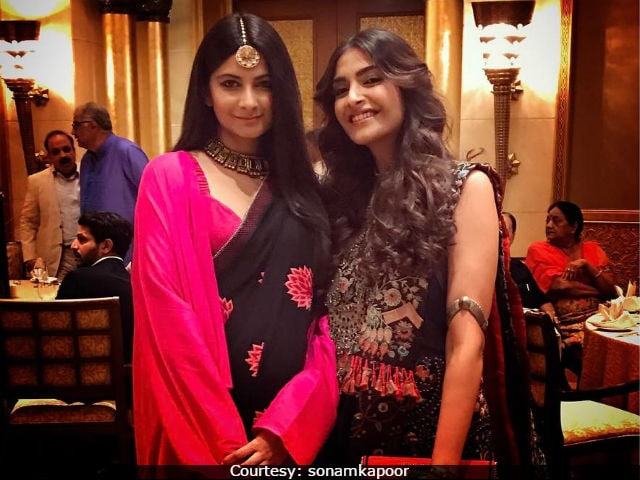 Sonam and Rhea during their cousin's wedding in Abu Dhabi (Courtesy: sonamkapoor )

New Delhi: Actor Sonam Kapoor shared a special message on Instagram for sister Rhea Kapoor on the latter's 30th birthday. The video is a compilation of several pictures of the Kapoor family, including their father and actor Anil Kapoor, mother Sunita Kapoor and other siblings. Taking cue from a quote, Sonam, 31, writes, "Forever my soulmate, my rock, my sanity....Happy Birthday Rheeee!!" Earlier in the day, Sonam had also shared a throwback picture of herself with Rhea from their childhood days and thanked her for always being there by her side. She wrote, "You've helped me make every decision in my life and have been there unconditionally through everything." Sonam Kapoor, who is known for her style statement and is, tagged as the fashionista of Bollywood credits her sister Rhea Kapoor for making her a style icon.

Here's what Sonam posted for Rhea:

There were once two sisters who were not afraid of the dark because the dark was full of the other's voice across the room, because even when the night was thick and starless they walked home together from the river seeing who could last the longest without turning on her flashlight, not afraid because sometimes in the pitch of night they'd lie on their backs in the middle of the path and look up until the stars came back and when they did, they'd reach their arms up to touch them and did. Jandy Nelson, The Sky is Everywhere. Forever my soulmate, my rock, my sanity....Happy Birthday Rheeee!! @rheakapoor

Dear @rheakapoor not many people understand that I'm still standing at this point in my life because you've always held my hand. You've helped me make every decision in my life and have been there unconditionally through everything. No one is smarter, wiser or prettier then you. No one makes me laugh as much you do and no one exasperates me as much. Love you Rhee bee you the bestest baby sister in the the world! #birthdayprincess #dirtythirty #happybirthdayrhea #princesskapoor

Meanwhile, Sonam and Rhea's brother Harshvardhan Kapoor, who debuted in Bollywood in 2016 with Mirzya also shared a picture of himself with Rhea's tattoo on his back.

No matter how much I try, I can't seem to get you off my back. Anyway happy birthday @rheakapoor

A post shared by Harshvardhan Kapoor (@harshvardhankapoor) on Mar 4, 2017 at 9:25pm PST

The birthday wishes aren't yet over for Rhea. Here's a special message from the doting father Anil Kapoor straight from London.

On your special day, I want to thank you for making each & every day special for all of us! Happy Birthday @rheakapoor!! I wish I was by your side today, celebrating the incredible person that you've grown into! Sending you lots of love from London!

Promoted
Listen to the latest songs, only on JioSaavn.com
And this one's from Sunita Kapoor, Rhea's mother.

" She Leaves A Little Sparkle Wherever She Goes" Happy Happy Birthday My Princess.. You Are Amazing, Strong, Brave and Wonderful.. Love you so much

Rhea Kapoor began her stint in Bollywood as producer to Sonam Kapoor's two filmsAisha and Khoobsurat. She is now prepping for Veerey Di Wedding, which would again star Sonam. Kareena Kapoor Khan and Swara Bhaskar are also a part of the film. Kareena, who is currently on maternal leave, will begin shooting for the film in April.