Sonam Kapoor And Anand Ahuja Are Chillin' Like Villains On Vacation. See Pics 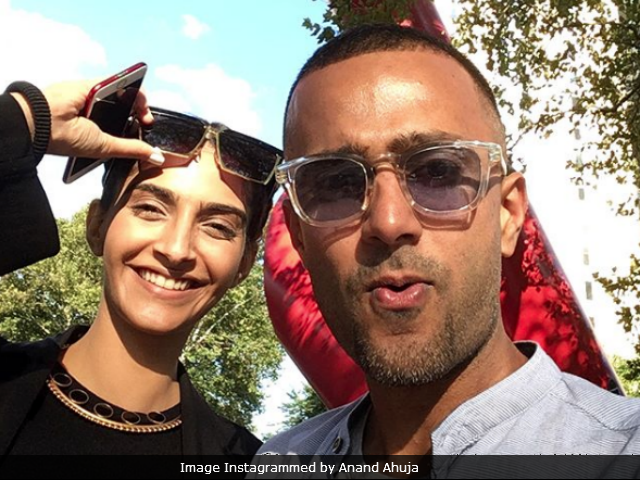 New Delhi: Actress Sonam Kapoor and her rumoured boyfriend Anand Ahuja continue to share updates from their vacation in the US. The couple recently made pit-stops at the Wharton School of Business inPhiladelphia and New York theme park Six Flags Great Adventure and uploaded entries on Instagram. The Khubsoorat actress and Anand are clearly having a gala time checking off places from their itinerary. On Wednesday, Anand shared a new selfie with Sonam and captioned the pic: "Chillin' out maxin', relaxin' all cool," which are lyrics from the theme song of the Will Smithsitcom The Fresh Prince of Bel-Air. In the picture, Sonam Kapoor and Anand Ahuja can be seen twinning in black oversized sunglasses. Guess who 'liked' the picture? Sonam's dad Anil Kapoor.

Anand Ahuja's Instagram posts reveal that he's a sports enthusiast. In one of his latest posts, Anand can be seen performing cool tricks with a basketball.

Shooting some bball outside of the school ... 3/3 @sonamkapoor

Here's another post shared by Anand Ahuja in the three-part series:

Sonam Kapoor shared a few posts from her recent photoshoot with designer Anita Dongre for Harper's Bazaar Bride magazine in the Big Apple. Sonam also celebrated Anand's birthday in New York last week. Sonam made his birthday very special by gifting him a bike. Anand shared the exclusive pictures on Instagram and also thanked the 32-year-old actress for the surprise birthday gift.

Sonam Kapoor was last seen in Neerja and she has films like the Sanjay Dutt biopic (starring Ranbir Kapoor in the lead role) and R Balki's Padman, co-starring Akshay Kumar and Radhika Apte, in the pipeline.
Comments
sonam kapooranand ahuja