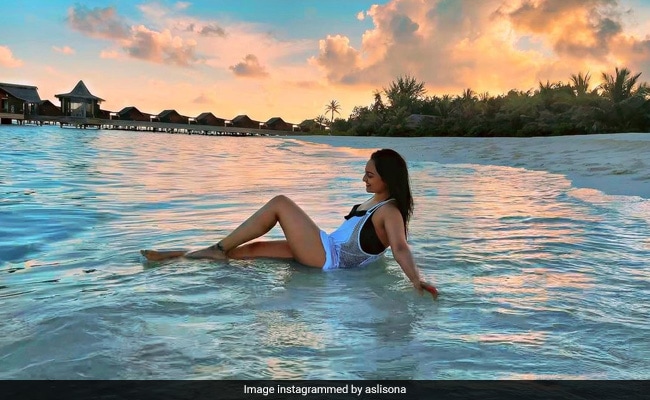 Sonakshi Sinha shared pictures of herself from her happy place on her Instagram profile on Monday. Dressed in a dual-toned black and white outfit, the actress can be seen flashing a bright smile in the photograph. The actress can be seen chilling on the beach in Maldives (going by her latest Instagram posts). Sonakshi Sinha captioned one of her posts: "Happiest in the water," adding the hashtag #discoverparadise. In a separate post, she wrote: "Island girl." The actress also posted pictures from her Maldives vacation on her Instagram stories. Take a look at Sonakshi Sinha's pictures here:

A few days ago, the actress shared throwback pictures from the sets of her film Force 2. Along with it, she wrote: "Been 4 years since this amazing film that I am so proud to be a part of! Definitely one of the best working experiences for me, Plus KK was quite badass so win win! Thanks team Force 2. Can't wait to work with you'll again."

Sonakshi Sinha stepped into Bollywood with the 2010 film Dabangg, opposite Salman Khan. She has starred in several super hit as well as some critically acclaimed films like Rowdy Rathore, Son Of Sardaar, Dabangg 2, Holiday: A Soldier Is Never Off Duty, Lootera, Once Upon A Time In Mumbai Dobaara, R... Rajkumar, Action Jackson, Kalank and Mission Mangal, among others.

Sonakshi's last theatrical release was Dabangg 3, co-starring Salman Khan. Her upcoming project is Bhuj: The Pride Of India, starring Ajay Devgn in the lead role. The film is slated to release on OTT platform Disney+Hotstar.