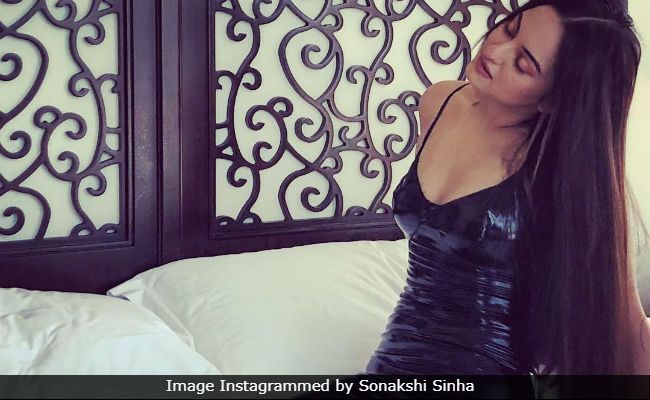 New Delhi: Hillarious, can't even begin to describe the comments that Sonakshi Sinha's latest Instagram post has received. Sonakshi posted a picture of herself, dressed in a black latex dress and captioned it: "I woke up like this." The post has gotover 1.6 lakh likes it but comments on it are the main highlights. "This is definitely not a night dress" and "You went for the party whole night and are lying to your dad? Not asanskaari things" are posted. (ROFL). Other users on Sonakshi's Instagram reviewed it like: "Who would feel comfortable with that dress in bed', "Sonakshi Sinha, telling a lie." Meanwhile, "Beautiful"and "perfect" are also some of the comments. Here's Sonakshi's post we were talking about.

Interestingly, this is not the first time that the 30-year-old actresshas posted a picture in the same latex dress. She wore it to Karan Johar's party in February. Sonakshi Sinha's earlier Instagram posts totally corroborate to the fact that that this dress might be her favourite. She captioned the post: "Latex is Love!! and this bomb dress deserves a post of its own.

Promoted
Listen to the latest songs, only on JioSaavn.com
Take a look at the Sonakshi Sinha's posts (where she's wearing the same dress).

Latex is Love!!! (@mohitrai said this bomb dress deserves a post of its own) #sonastylefile

Coz we got so much in common! Cat eyes and #WelcomeToNewYork #aboutlastnight #funtimes

Sonakshi Sinha was last seen in Welcome To New York co-starring Diljit Dosanjh. The actress will also be seen as a runaway bride in Mudassar Aziz's Happy Phir Bhaag Jayegi, featuring Abhay Deol, Jimmy Sheirgill, Ali Fazal and Diana Penty. The film is scheduled to release in August. She also has Kalank and Dabangg 3 in the pipeline.