Making a direct reference to the controversy that snowballed around her photoshoot last month, Sobhita wrote a sarcastic caption 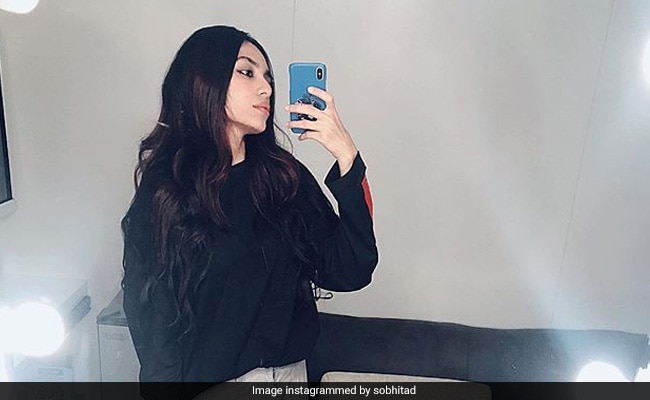 Sobhita Dhulipala just hit bullseye - the "haters" will agree. Almost a month after the model-turned-actress was accused of faking a self shot photoshoot, she uploaded two more mirror selfies. Like the nature of the photo suggests, Sobhita can be seen clicking her own self in the two photos she shared - she happily posed in her dad's old clothes. Making a direct reference to the controversy that snowballed around her photoshoot last month, Sobhita wrote a sarcastic caption: "Photo clicked by neighbour. Now haters will come and say it's untrue and I took it myself." Last month, Sobhita shared two photos from her self-styled photoshoot for Cosmopolitan magazine and wrote that they were clicked on "self-timer", soon after which a viral behind-the-scenes photo revealed a man photographing Sobhita for similar shots. In a statement later, Sobhita clarified that only one of the two photos she shared was clicked by her while the other one was shot by a "kind gentleman" who offered to help.

While the last photoshoot for was for a magazine cover, this time, Sobhita "Upcycled my dad's cargos from the nineties" because she believes in this fashion motto: "Love thy vintage."

Photo clicked by neighbour. Now haters will come and say it's untrue and I took it myself . . #UpcycledMyDadsCargosFromThe90s #LoveThyVintage

This is the photo album which led to accusations that Sobhita was sharing only half the truth on Instagram. The Made In Heaven actress, who wrote in her statement that she should have posted these photos with a more careful caption, indeed altered the caption to say this: "I had the unique opportunity to style myself, do my hair/makeup and take this picture (first one) on a phone (hello, self-timer, my new friend) in the confines of my house."

I had the unique opportunity to style myself, do my hair/makeup and take this picture(first one) on a phone (hello, self-timer, my new friend) in the confines of my house. It has been empowering to be reminded that one needs very little aid when they are truly invested in creating something - even if it is just pictures; it has been humbling to come in contact with people who nurture an individual voice and give it a public platform. I spent a couple of days photographing myself for this story for Cosmopolitan magazine, not only did I thrive in the creative stimulation but also had fun because I didn't need to be anything but truthful and relevant. Cheers to significance that is found in simplicity. Cheers to joy that is multiplied by the spirit of sharing. Cheers to women rooting for women. :) . . @cosmoindia @nandinibhalla #NoRetouching #PhonePhotography (Shout out to the Samaritan who helped clicking the second photo, on my phone)

In her lengthy statement, Sobhita detailed the happenings of the photoshoot in chronological order for Instagram's benefit: "I style myself, go to the terrace with a coffee mug and a couple of tools to prop up my phone to take pictures. There are people on the terrace and one kind gentleman upon learning that I'm trying to shoot my pictures, offers help. After he graciously shoots a few pictures in the frame I wanted, I thank him and we depart. Neither was the picture shot by him used by Cosmopolitan (It doesn't belong with the magazine's mandate) nor am I anything but proud of this wonderful collaboration with the magazine. I only posted it along with the official ones because I like it. I recognise that I should have altered the caption text to mention that the second image was not part of the magazine shoot. I wish I had a more exciting, dramatic story but alas, truth often wears plain robes! Stay home and stay safe."

Sobhita Dhulipala is best known for her roles in web shows such as Amazon Prime's Made In Heaven and Netflix's Bard Of Blood and Ghost Stories. She has featured in films such as The Body and Raman Raghav.