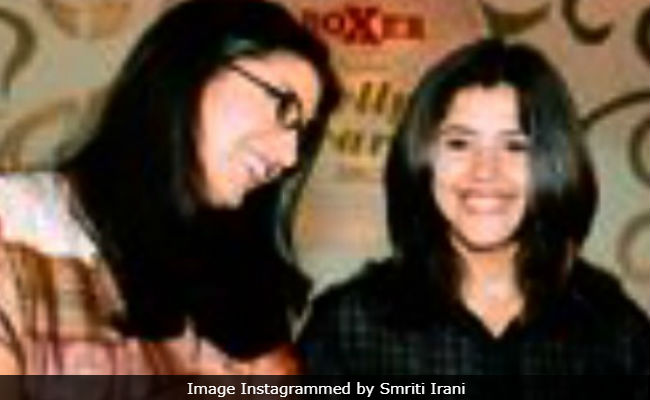 New Delhi: Smriti Irani, who was reminiscing over her Kyunkii...Saas Bhi Kabhi Bahu Thi days shared a million-dollar throwback picture tagging producer Ekta Kapoor, who poached it after a few hours. Ekta Kapoor re-posted it on her Instagram page with a new caption, which troubled her 'politician' friend. Ekta's caption read: "Some people are like wine, they get better with age!!! Not that we are old. Love this woman for her resilience charm wit and strength." Now, Smriti Irani, who is Minister of Textiles, did not want herself to be associated with wine. She wrote: "Hey Bhagwan, I'm a politician can't be wine; find another beverage." (ROFL).

When Smriti Irani shared this post, she captioned it: "My favourite throwback jingle Jab main chhota bachcha tha, badi shararat karta tha tab roshan hota Bajaj, what's yours ? TBH to the times when you have troubled your loved ones and lived to speak about it." We got a glimpse of Smriti Irani's humorous side on her original post, when she addressed Ekta Kapoor (who is currently on a vacation in Sochi, Russia) in the comments section and wrote: "Kabhi Sochi mein socha tha you will see a pic so old." Another highlight of the post was Smriti Irani's reply to a fan who complained about the picture being slightly blurred, she wrote: "That's what the past looks like ... a blur."

Some ppl r like wine they get better with age!!! Not that we r old:) love this woman for her resilience charm wit n strength !

Promoted
Listen to the latest songs, only on JioSaavn.com
Whose caption do you like better? Tell us in the comments section. Smriti Irani made her television debut with Ekta Kapoor's Kyunkii...Saas Bhi Kabhi Bahu Thi in 2001. She is best-known for her character Tulsi Virani and has also featured in shows such as Hum Hain Kal Aaj Aur Kal, Thodi Si Zameen Thoda Sa Aasmaan and Virrudh among others.

Smriti Irani is married to businessman Zubin Irani. She hasn't featured in television shows or films after she joined politics. She almost starred in Umesh Shukla's All Is Well but gave up the role due to her work commitments as a Union Minister. Supriya Pathak replaced Smriti Irani in the film.