Seen this picture of Shah Rukh Khan and Zubin Irani yet? 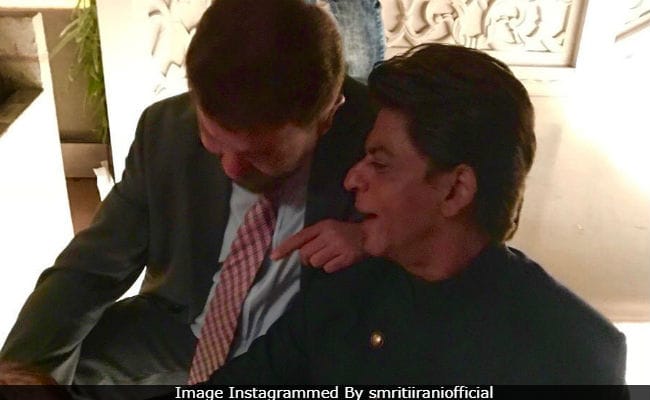 On Sunday, Union Minister Smriti Irani shared a picture of superstar Shah Rukh Khan with her husband Zubin Irani and captioned it hilariously as, "And, they say only women gossip." The caption of the picture, which appears to be taken during Akash Ambani and Shloka Mehta's engagement party in Mumbai over the weekend, is winning the Internet and how. Comments such as "actually" and "men gossip more than women" have been posted. "Your posts are so full of satire. Love them," read another comment. For those who don't know, Shah Rukh Khan and Zubin Irani have been friends since childhood. Also, it was SRK who had named Mr Irani's elder daughter as Shanelle.

Promoted
Listen to the latest songs, only on JioSaavn.com
Take a look at Shah Rukh Khan and Zubin Irani's picture here.

#and they say only women gossip @iamzfi @iamsrk

Last year, when Smriti Irani joined Instagram, she had shared a picture of Shanelle, which SRK re-posted and wrote, "My childhood friend Zubin's daughter is all grown up and so pretty. And just for the record, I named her Shanelle." She is Zubin Irani's daughter with ex-wife Mona.

My childhood friend Zubin's daughter all grown up and so pretty... and just for the record I named her Shanelle... #Repost @smritiiraniofficial with @repostapp #familyphoto some one is being missed sorely @shanelleirani

Smriti Irani, a former TV star, is currently the Minister of Textiles. She is best-known for her successful show Kyunkii...Saas Bhi Kabhi Bahu Thi, in which she played the role of Tulsi. Hum Hain Kal Aaj Aur Kal, Thodi Si Zameen Thoda Sa Aasmaan and Virrudh are some of Ms Irani's other shows.