Smriti Irani Served Kadha To Maniesh Paul Instead Of Tea. Only She Can

Maniesh Paul to Smriti Irani: "...thanks for having me over and being warm as always" 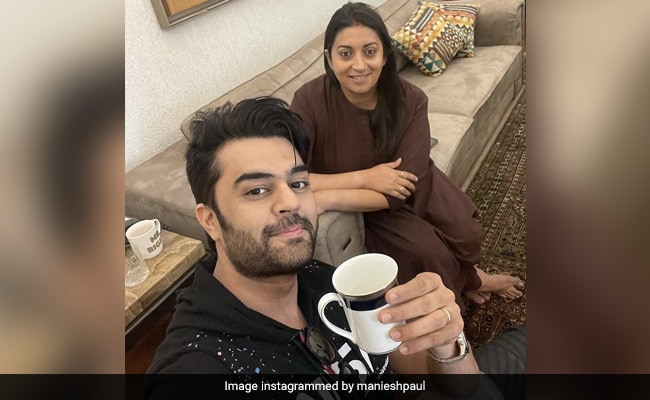 Actress-turned-politician Smriti Irani did something unexpected again. Keeping the pandemic situation in mind and the need for some added immunity, Smriti Irani replaced her welcome drink with kadha a recent guest she had over. The guest in question is none other than TV personality Maniesh Paul, known for his signature sense of humour. Maniesh thanked Smriti Irani in an Instagram post, writing: "Thanks for a cup of lovely kadha, Smriti ma'am. Kya time aa gaya hai... chai ki jagah sab kadha peeney lage hain (What a time has come. Instead of tea, people are drinking kadha these days)! But thanks for having me over and being warm as always. PS: Mask was taken off just for the pic... love you all, spread love."

Meanwhile, this is what Smriti Irani shared on her Instagram story: "Kadha yukt, chinta mukt (Kadha in, worries out)". LOL, only Smriti Irani can. 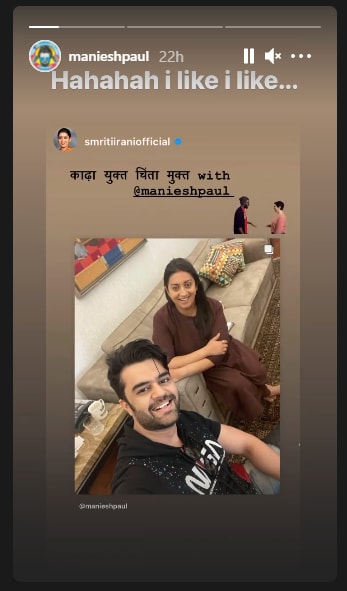 Last month, Maniesh Paul trended a great deal for a Humans Of Bombay post, in which he opened up about his struggles to establish himself in the entertainment industry and how his wife Sanyukta supported him: "While I struggled, Sanyukta backed me. Finally, in 2006, I got a full-time job as an RJ. So, I told Sanyukta, 'Let's get married!' We had a big fat Punjabi-Bengali wedding. After moving in with me, Sanyukta took up a job as a teacher; I was juggling my job and a few anchoring assignments. We barely got any time together, but she never complained... not once."

Maniesh Paul is a popular TV personality, known for hosting shows such as Jhalak Dikhhla Jaa, Sa Re Ga Ma Pa Li'l Champs 2020, India's Got Talent, Dance Ke Superstars, among others. He has also featured in films such as Baa Baaa Black Sheep, Mickey Virus and Tere Bin Laden 2.

"Feels Like A Party," Writes Kajol As She Returns To Set