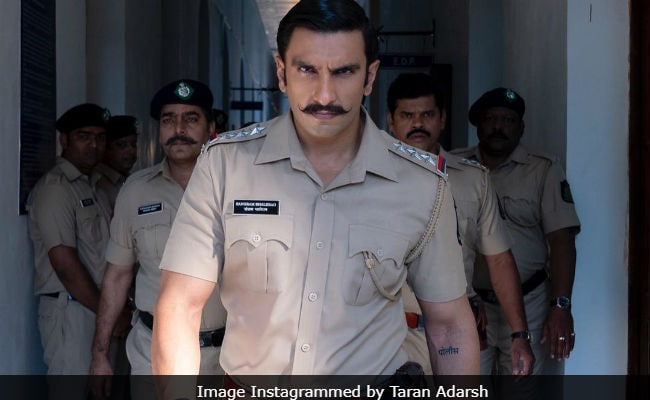 Ranveer Singh in a still from Simmba. (Image courtesy: taranadarsh)

Seems like there is no stopping for Rohit Shetty's Simmba, starring Ranveer Singh and Sara Ali Khan as the film has managed to collect over Rs 159.83 crore within two weeks of its release, reports Bollywood trade analyst Taran Adarsh. That's not it! The film earned Rs 9.02 crore on Friday alone and it is expected to garner Rs 175 crore in the second weekend itself. In his tweet, Taran Adarsh also predicted that's the high-octane action film is likely to enter the Rs 200 crore club before the third week. "Simmba starts Week 2 with a bang... Will cross Rs 175 crore in weekend 2 itself... Will make an entry into Rs 200 crore club before week 2 concludes... (Week 2). Fri 9.02 cr. Total: Rs 159.83 cr. India biz."

In a separate tweet, Taran Adarsh revealed that Ranveer Singh's film is not only performing well at the Indian box office but also in the international arena. The film earned over Rs 58.62 crore within a week internationally. "Simmba is outstanding in international markets... Concludes Week 1 on a glorious note... Collects $ 8.408 million (Rs 58.62 crore)," tweeted Taran Adarsh.

Simmba might not have received great reviews but it had a great opening at the box office. The film earned over Rs 20 crore on the day of its release. Film critic Saibal Chatterjee gave the film two stars out of five, in his review for NDTV and wrote: "Simmba is the kind of film that derides toxic masculinity while ill-advisedly celebrating unbridled virility as a necessary component of law enforcement. Instill fear in the hearts of the wrongdoers, Singham advises Simmba."