Simmba's business is expected to grow over the weekend 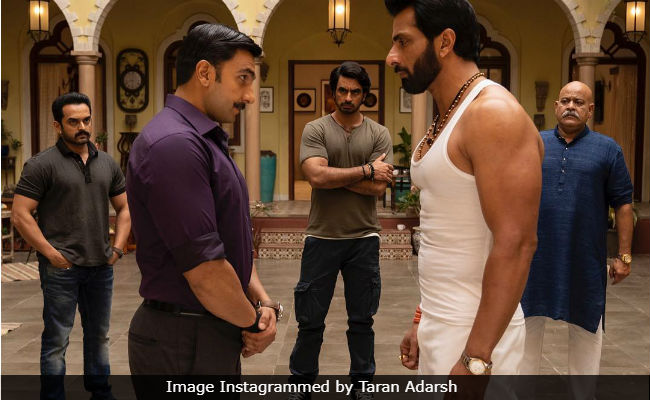 Ranveer Singh and Sonu Sood in a still from Simmba. (Image courtesy: taranadarsh)

Rohit Shetty's Simmba, starring Ranveer Singh and Sara Ali Khan might not have opened to great reviews but the film had a great start at the box office and it has managed to collect over Rs 44.05 crore within two days of its release, reports Bollywood trade analyst Taran Adarsh. According to Taran Adarsh, a major section of Simmba's success could be attributed to the film's performance at Mumbai theaters. The film collected Rs 23.33 crore on Saturday. "Simmbaroars on Day 2... While Mumbai circuit is exceptional, the other circuits that were slightly low on Day 1 have also picked up... Growth on Day 2," tweeted Taran Adarsh. In his post, he also predicted that the film is expected to "score big numbers" on Day 3 (Sunday).

Simmba had a great start at the box office. The film collected Rs 20.72 crore on its opening day. The high-octane action film was equally adept at performing in the international arena. In a separate tweet, Taran Adarsh revealed that the film managed to collect Rs 13.14 crore across the globe and that it's key markets comprise USA, UK, Canada, UAE and Australia.

Simmbaopened to largely average reviews. In his review for NDTV, film critic Saibal Chatterjee gave the film two stars out of five and wrote: "Simmba is the kind of film that derides toxic masculinity while ill-advisedly celebrating unbridled virility as a necessary component of law enforcement."

Simmba showcases the story of a cop named Sangram Bhalerao aka Simmba (played by Ranveer Singh). The film also stars Sara Ali Khan, Sonu Sood and Ashutosh Rana. The film has been directed by Rohit Shetty and it has been co-produced by Karan Johar.