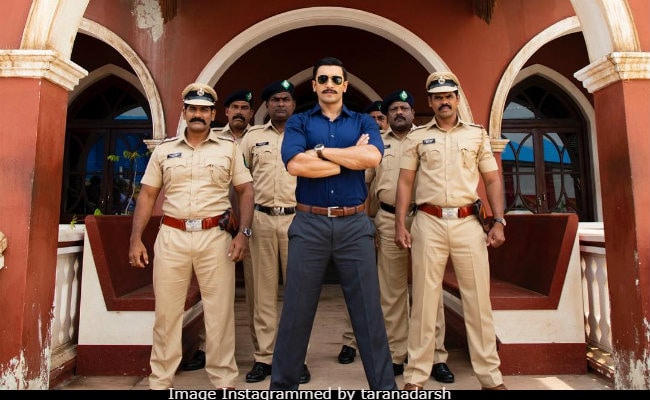 A still from Simmba (courtesy taranadarsh)

Ranveer Singh's Simmba is roaring at the box office! After successfully running at the theatres for 10 days, the Rohit Shetty-directed cop drama has raked in as much as Rs 190 crores and is still very much counting, reported trade analyst Taran Adarsh. Simmba's ticket sales have made the film solidify a place on the list of highest earning films of 2018 (Simmba released on December 28) and it is the third highest grossing film, as per Mr Adarsh' evaluation. On Monday, this is what he tweeted: "Simmba refuses to slow down... Packs a solid punch in Weekend 2... Nears Rs 200 cr mark... Emerges third highest grosser of 2018, after Sanju and "Padmaavat"... [Week 2] Fri 9.02 cr, Sat 13.32 cr, Sun 17.49 cr. Total: Rs 190.64 cr. India biz."

Earlier, Mr Adarsh had tweeted to say that Simmba will not stop short of Rs 200 crore but will also eye the Rs 250 crore bounty. Now, he has tweeted a detailed progress report of Simmba's box office performance. Ranveer Singh's film crossed the Rs 50 crore mark in three days, the Rs 150 crore mark in a week and Rs 175 crore mark in just 10 days.

As per Taran Adarsh, Simmba is also all set to "challenge" the life time collections of Golmaal Again and Chennai Express, both Rohit Shetty directed blockbusters.

Simmba marks Ranveer Singh's first collaboration with Rohit Shetty. The 33-year-old actor, who plays the titular role in the film, assigned complete credit for the film's success in an interview with news agency IANS recently. "I want to thank Rohit Shetty for believing in me and making me his hero. Rohit's vision propelled by the collective effort of his entire team has been the sole reason behind Simmba hitting the bull's eye. It has been an absolute honour to work with him and his stellar team. Their large-hearted mentoring and exemplary work ethic has spurred a tremendous growth in me as a performer," IANS quoted Ranveer as saying.