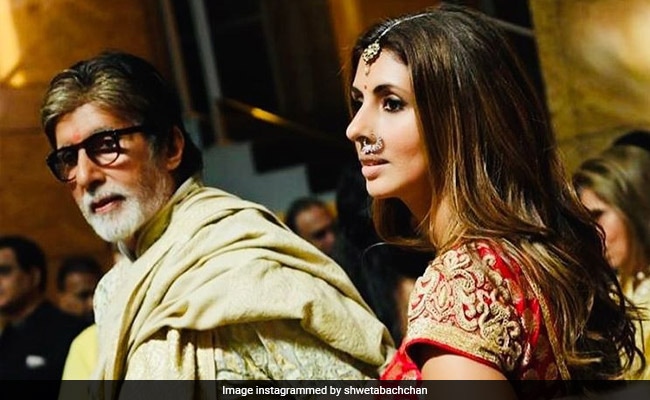 Shweta Bachchan Nanda took a turn near Bandra-Worli Sea Link road in Mumbai and found herself facing a mural immortalising Amitabh Bachchan's character from 1975 film Deewaar, which gave him the informal title of Bollywood's 'Angry Young Man.' Shweta clicked a picture of the building and shared on Instagram with the caption, "B for (my)Beacon." In the comments thread, her actor brother Abhishek Bachchan shared a raised hands emoticon celebrating their father's popularity. Riddhima Kapoor Sahni, daughter of actors Neetu and Rishi Kapoor, conveyed her thoughts with folded hands emoticon and an OK emoji.

Shweta Bachchan Nanda is the elder of Jaya and Amitabh Bachchan's two children. Abhishek Bachchan is her younger brother. Shweta is married to businessman Nikhil Nanda and she splits her time between Mumbai and Delhi. Shweta and Nikhil are parents to Navya Naveli and Agastya, both of whom are frequently spotted in the company of their maternal grandparents.

Shweta is a published author - her book Paradise Towers released in 2018 on Amitabh Bachchan's birthday. Abhishek is an actor and he is married to actress Aishwarya Rai Bachchan and they are parents to Aaradhya.

Recently, the Bachchans trended big time after Big B, Abhishek and Aishwarya tested positive for the coronavirus. Abhishek and Amitabh Bachchan were admitted to Mumbai's Kokilaben Hospital. They made full recovery and returned home last month.

Workwise, Amitabh Bachchan returned to the sets of quiz-based reality show Kaun Banega Crorepati 12, which will go on air soon.