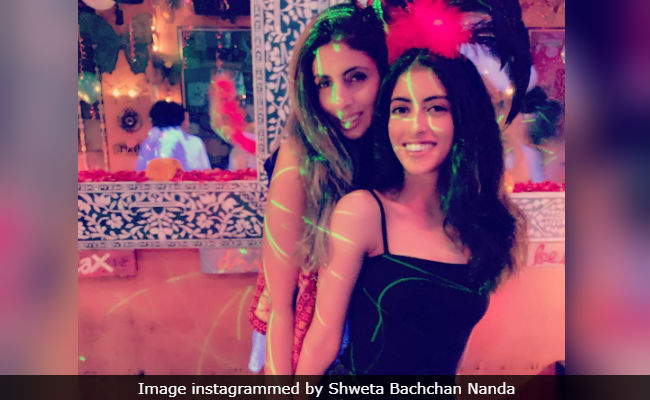 Shweta Bachchan Nanda and her daughter Navya Naveli are having a gala time at the New Year's vacation, for which Shweta's husband Nikhil Nanda and their son Agastya have also accompanied them. Shweta Bachchan instagrammed glimpses from her vacation diary, which included snaps from Sunday night's party where the Nandas had put on their party shoes for good. "Dance little lady, dance," Shweta captioned a picture, in which she can be seen dancing with Navya. On her Instagram Story, Shweta shared a video of Agastya in full swing. Shweta shared another picture of Navya, in which she posed with a flower as her air accessory. Shweta wrote in caption that Navya was inspired by Paul Gauguin, a French artist who painted pictures of women with flower(s) in their hair.

Shweta's pictures did not give away their vacation location but going by her captions, we're sure that the Nandas are on a beachside holiday. Here are some more photos:

Shweta is the elder of actor couple Amitabh Bachchan and Jaya Bachchan's two children. Her brother Abhishek and his wife Aishwarya Rai Bachchan are also actors. Shweta married businessman Nikhil Nanda in 1997. Navya Naveli, their daughter, turned 21-years-old in December while their son Agastya celebrated his 18th birthday in November 2018.

Shweta Bachchan Nanda is the author of Paradise Towers, a fictional novel which released in October. Shweta did not opt for a career in acting like her parents and instead she chose to be a writer like her grandfather Harivanshrai Bachchan, a celebrated poet.