Shveta Salve is such a cool mom 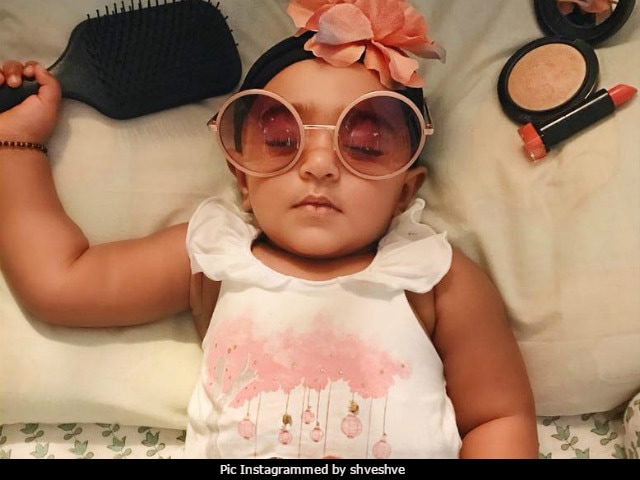 New Delhi: A visit to actress Shveta Salve's Instagram is actually a delight. It's been a while that the mother of one has been Instagramming pictures in a series of three. We couldn't but bringing it to your notice after the posts she made today. Shveta put her baby daughter to sleep and decided to have some fun with the sleeping baby. The series that could have been titled - "Let's have some Fun" comprises photos with captions like "Keep Calm and Stay Fabulous" and "We love Books even in our Dreams." In one of the photos, Shveta's one-year-old daughter has been given props like a book and a pen while the third one is our personal favourite, in which she looks like a cute little fashion diva.

Arya, Shveta's daughter, is already a star on her mother's Instagram. Shveta Salve, thank you for such cool pics ya. Wish we had Instagram when we were kids!

Promoted
Listen to the latest songs, only on JioSaavn.com
Arya and her cute antics have featured in many of Shveta's previous posts. The mother-daughter duo trends on and off for their travel diaries on Instagram. In November last year, Shveta enjoyed the sun, sea and sand of Goa with her three-month-old daughter. Six months after she welcomed her baby daughter, she documented her progress on getting back in shape. Sharing a picture of herself in a bikini, "She wrote: 6 months after bumpy... not bad I guess?"

Shveta Salve is married to businessman Hermit Sethi and Arya is their first child together. She is best known for TV shows like Lipstick and Kaahin Kissii Roz. Shveta made her Bollywood debut in 1999's Pyaar Mein Kabhi Kabhi and was last seen in last seen in 2015's Ek Tha Chander Ek Thi Sudha.