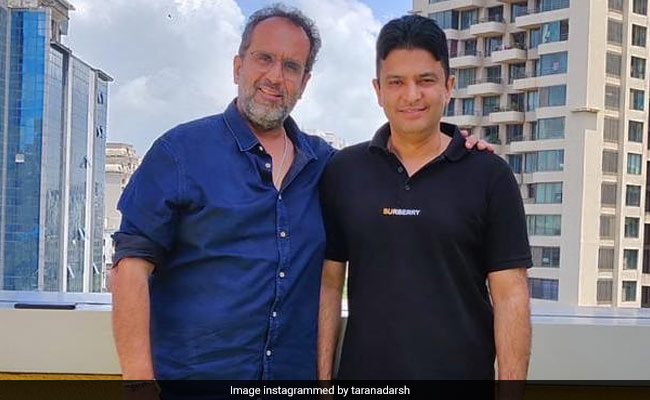 Filmmaker Aanand L Rai and film producer Bhushan Kumar are all set to co-produce the forthcoming film Shubh Mangal Zyada Saavdhan, which will star Ayushmann Khurrana in the lead role. The duo have earlier worked together on projects like Tanu Weds Manu and Zero, the music of which was backed by Bhushan Kumar's T-Series. On Monday morning, Bollywood trade analyst Taran Adarsh shared the news on social media and wrote: "Aanand L Rai and Bhushan Kumar join hands. Will jointly produce content-driven cinema, starting with Shubh Mangal Zyada Saavdhan. Stars Ayushmann Khurrana, directed by Hitesh Kewalya." The film is scheduled to release next year.

Speaking about his collaboration with Bhushan Kumar, Aanand L Rai told news agency IANS: "I believe they add tremendously to a film like Shubh Mangal Zyada Saavdhan with their understanding of music and the pulse of the audience. With our combined strengths, we hope to collaborate on scripts that are exciting, empowering and entertaining."

Shubh Mangal Zyada Saavdhan is the second installment of the 2017 film Shubh Mangal Saavdhan, which featured Ayushmann Khurrana and Bhumi Pednekar in the lead roles, addressed the subject of erectile dysfunction with humour. The film performed well at the box office and received good reviews.

Ayushmann Khurrana has reprised his role in the film. However, as of now the remaining cast of Shubh Mangal Zyada Saavdhan has not been announced as of now. The first part of the film was directed by RS Prasanna while the second installment will be helmed by Hitesh Kewalya.