Shruti Haasan, your smile says it all in the photos 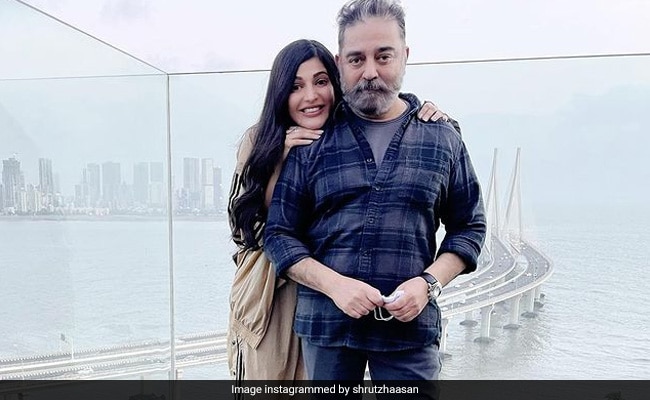 Shruti Haasan updated her Instagram feed on Thursday by sharing a few photos of herself and her dad and actor Kamal Haasan. Because why not, he is her "favourite human." The singer-actress shared three pictures, in which she can be seen smiling with all her heart while posing for the camera with Kamal Haasan on what appears to be a terrace. "He's not just my dad, he's my favourite human," she wrote in the caption of her post. Within minutes, her post was flooded with heart icons dropped by her fans in the comments section.

On Father's Day in June, Shruti Haasan wished Kamal Haasan with this goofy picture of themselves. Her note for the actor read: "You are blessed if the person who you learn from the most and the person who makes you laugh the most also happens to be your parent. Happy Father's Day. Thank you for being My daddy dearest."

In terms of work, Shruti Haasan is a singer, as well as an actor. She began her career in the music industry by singing the track Potri Paadadi Penne for her actor father Kamal Haasan's film Thevar Magan. She was just 6 then. Post that, she has crooned several songs for her father's films, including Chupadi Chupadi Chaachi for Chachi 420, Ram Ram Hey Ram for Hey Ram and Allah Jaane, Unnaipol Oruvan and Vaanam Ellai for Unnaipol Oruvan.

Mammootty, Described By Son Dulquer Salmaan In A Word: "Sovereign"