Shruti Haasan Broke Her Coffee Fast After 15 Years. Here's How It's Going

Shruti Haasan may be drinking coffee occasionally but she's running back to her matcha tea every now and then. 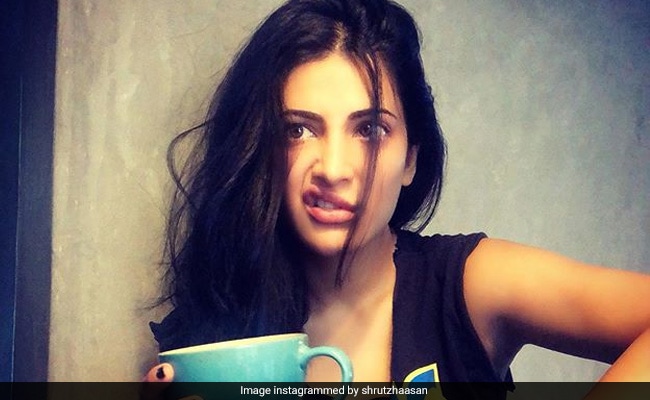 Shruti Haasan, who is spending days in the lockdown with her cat, her hula hoop and music, shared a glimpse of her current mood on Instagram. From Shruti's expression, it appears that things are not quite the way she wants them to be. In a "PS", Shruti also revealed that now-a-days she's been having coffee after staying away from the beverage for as long as 15 years. But in her heart, Shruti Haasan in a matcha kinda girl. She may be drinking coffee occasionally but she's running back to her matcha tea every now and then. Sharing a photo of her sporting a quirky expression, Shruti wrote: "Mood. PS - I've started drinking teeny tiny amounts of coffee for the first time in maybe 15 years. I feel very strange... in a good but mostly bad way. LOL. Back to my matcha."

#MOOD ps- I've started drinking teeny tiny amounts of coffee for the first time in maybe 15 years. I feel very strange.. in a good but mostly bad way lol back to my matcha #matchamadeinheaven

Here it is by popular demand

It's 10 pm - tonight I thought I'd share something far from perfect. We are imperfect in an imperfect time .I like that the world gets quieter sooner these days. The silence we share in loneliness is so important for all of us. I've been finding it really hard to write something new, I've been finding it hard To express which has scared me.but tonight I asked myself "what do I really want " I really wanted to sing a half song In whispers. I really wanted to share my music with all of you in whichever form it took. I hope everyone is well and home and safe and calm . (half full version on my IGTV )

Shruti Haasan trended a great deal recently for her honest statements about how being Kamal Haasan's daughter has its perks: "The combination of my surname and my resting b**** face has kept a lot of people at an arm's length. Now after many years, I feel comfortable and safe enough to open up and say whatever I want," she told news agency PTI at the screening of short film Devi.

Shruti Haasan was last seen in Devi, which also starred Kajol and Neha Dhupia and others. Shruti has also starred in Bollywood films such as Rocky Handsome, Welcome Back and Ramaiya Vastavaiya. She also voiced the character of Elsa in the Tamil version of Disney's Frozen 2.