"This is a sisterhood bond that gets nothing less than stronger," wrote Akshara Haasan 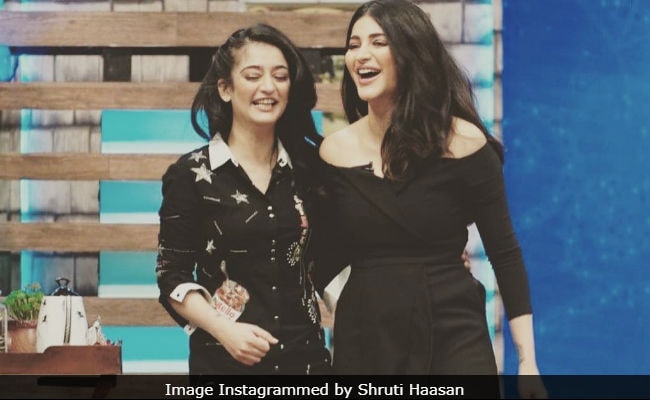 Don't we all have a particular picture in our photo archive that we simply love? Well, the reason we brought this up today is because the latest pictures shared by the Haasan sisters on their respective Instagram profiles reminds us of just that. On Wednesday morning, Shruti Haasan shared her "favourite" throwback picture, featuring her sister Akshara Haasan on her Instagram profile, in which she summed up the bond with her sister in the sweetest way possible. "A big part of what makes Akshara Haasan and my relationship so strong is our constant ability to laugh in any situation. Inside jokes, sister codes and our very own brand of crazy," wrote Shruti. In the picture, the sister-duo can be seen twinning in black outfits as they walk hand-in-hand. Shruti's post has over 2 lakh likes on Instagram as of now.

A big part of what makes @aksharaa.haasan and my relationship so strong is our constant ability to laugh in any situation .inside jokes, sister codes and our very own brand of crazy thankful for my thangacchi #hellosago #myfavouritepicture #akkathangacchi #besties

A few hours later, Akshara poached her sister's post and shared it on her Instagram profile with a different yet equally sweet caption. In her extensive note, the Shamitabh actress referred to Shruti as her "pillar, bestie" and her "strongest support." She wrote: "Our favourite picture after long. My pillar, my bestie, my strongest support and because of whom I'm the best version of myself. This is a sisterhood bond that gets nothing less than stronger, at the same time the massive room to breathe weirdness."

Shruti and Akshara are daughters of Kamal Haasan and Sarika. Shruti has featured in several Tamil as well as Bollywood films. She made her Bollywood debut with the 2009 film Luck and has starred in Bollywood films like Welcome Back, Ramaiya Vastavaiya, Dil Toh Bachcha Hai Ji and D-Day among others.

Akshara made her Bollywood debut with the 2015 film Shamitabh, co-starring Amitabh Bachchan and Dhanush. She also featured in Laali Ki Shaadi Mein Laaddoo Deewana. Akshara was last seen in the 2018 Tamil film Vivegam.