It Was A Mini Sholay Reunion For Amitabh Bachchan, Hema Malini And Ramesh Sippy On The Sets Of KBC 13 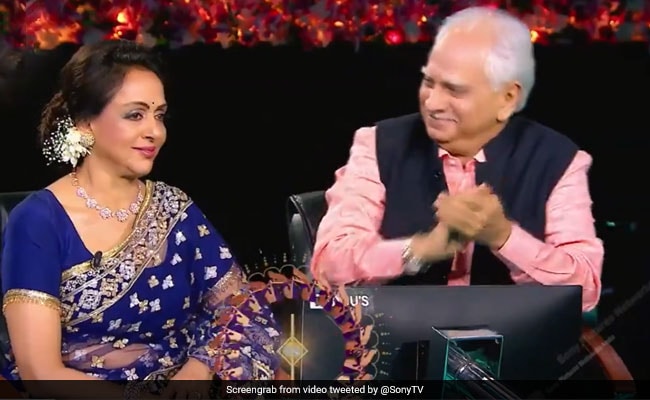 Hema Malini and Ramesh Sippy in a still from the video. (courtesy SonyTV)

The world might be divided on a lot of things but the magic of Sholay, the 1975 cult hit, is one thing cinema lovers agree on. Like the rest of the country ifSholay is one film you cannot get enough of, this week's episode of the popular game showKaun Banega Crorepati (KBC) is one you do not want to miss. The show, hosted by Amitabh Bachchan, will have actress Hema Malini and director Ramesh Sippy as guest contestants in the episode airing on October 15. Sholay directed by Ramesh Sippy featured Amitabh Bachchan as Jai and Hema Malini played Basanti.

We also get a glimpse of what appears to be Hema Malini recreating bits of a scene. And, it looks like there is much more in store for Sholay fans. The caption attached to the video, originally in Hindi, says, “The sets of KBC will host a Sholay reunion, where interesting trivia and memories related to the film will be revisited.”

Fans of the film seemed elated by the announcement and dropped heart emojis in the comment section. Several fans also asked to see actor Dharmendra, who played Veeru, the other half of the iconic Jai-Veeru pair. One fan wrote, “Talking about Sholay, where is our Dharam Ji. It can't be a Sholay reunion without the leading actor.”

Last year, Amitabh Bachchan shared a throwback picture from the premiere of Sholay. In it, he is seen with his wife and co-star Jaya Bachchan as well as his parents, Teji Bachchan and Harivansh Rai Bachchan.

Sharing the photo, Amitabh Bachchan wrote, “At the premiere of Sholay…15th August 1975, at the Minerva. Ma, Babuji, Jaya and a bow tied me. How pretty Jaya looks. This was the 35 mm print at the premiere... The 70mm Stereo sound print, first time in India was stuck in customs but after the Premiere got over by midnight, we got the news that the 70mm print was out of customs. We told Ramesh ji  (film's director Ramesh Sippy) to get it to the Minerva. It came, the first Indian film on 70mm stereo and I sat on the floor of the balcony with Vinod Khanna and finished seeing this amazing result till 3 in the morning."

Even 46 years after the release of the film, Sholay remains an integral part of Indian's cinema consciousness. With the script by the celebrated writer duo Salim–Javed and music by legendary RD Burman, Sholay had a talent pool, like never before, working on the film. The stellar star cast included Dharmendra, Sanjeev Kumar, Hema Malini, Amitabh Bachchan, Jaya Bachchan, Amjad Khan, AK Hangal, Jagdeep, Leela Mishra and Asrani, among others.