Shilpa Shetty's Son Viaan Is A Student Of The Year In The Making, Courtesy 'Guru' Tiger Shroff 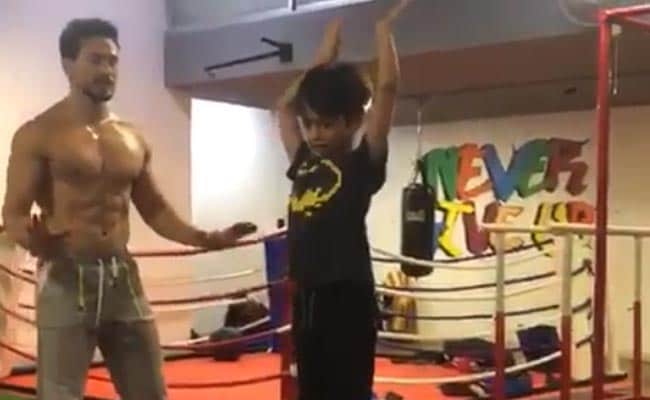 A glimpse of what Shilpa Shetty shared (courtesy theshilpashetty)

Shilpa Shetty revealed what her six-year-old son Viaan Raj Kundra was up to this weekend. The 43-year-old actress Instagrammed a video from what appears to be from a children's activity centre, starring little Viaan and his "guru" Tiger Shroff. "Little Gymnastic student showing off some skills in front of guru and the Student Of The Year! Tiger Shroff, thank you for being his inspiration... Viaan did his "first" back flip today... to impress you," wrote Shilpa. In the video, Viaan can be seen doing multiple back flips and Tiger encourages his little fan. Take a look at Shilpa Shetty's video here:

Little Gymnastic student showing off some skills in front of #guru and the Student of the Year! @tigerjackieshroff thankyou for being his inspiration.. Viaan did his "FIRST" back flip today .. to impress you ! #gymnastic #studentoftheyear #soty2 #gratitude #gymmotivation #proudmom #discipline #flip #flexible #practice #motivation #swasthrahomastraho

Earlier, Shilpa has written about how big a fan of "idol" Tiger Shroff Viaan is. The little one missed school and accompanied Shilpa Shetty to the sets of Super Dancer just to meet Tiger Shroff. "My little star Viaan Raj Kundra, who showed off his antics proudly to his idol Tiger Shroff. My heart swelled with pride. Now I know the feeling of those parents seeing their children perform on that stage! What a day!" The Student Of The Year 2 actors - Tiger, Tara Sutaria and Ananya Panday - were on sets to promote their upcoming film.

What an amazing day it's been, shot such an exciting episode for #superdancer with @tigerjackieshroff @ananyapanday @tarasutaria these students from #soty2 and ( a student who bunked school ) my little star #viaanrajkundra who showed off his antics proudly to his idol #tigershroff ..My heart swelled with pride. Now I know the feeling of those parents seeing their children perform on that stage ! What a day! #gratitude #memories #idol #love #mothersonlove #kids #tvshow #dance #pride

Viaan is also Shilpa Shetty's favourite work-out buddy and is often seen joining her in fun training programmes such as rock climbing. Viaan also often doubles up as Shilpa's weight when it comes to her gym diaries.

Ways of keeping the child alive within me. #indoorrockclimbing with my son , and he's giving me a run for my money..ME NOT giving up.. Summer has kicked in and I'm looking for ways to entertain him and myself! This was sooo fun and a great #coreworkout. 2birds killed with 1 stone #clawplay #mommymode #kids #entertainment #workout #gratitude #happiness #qualitytime #playtime #fun #momandson #goals #saturday #saturdayvibes

Shilpa Shetty is a co-judge on Super Dancer 3. Tiger Shroff's Student Of The Year 2 releases on May 10.