Vacation Mode Off, Shilpa Shetty Gets "Back To The Grind" 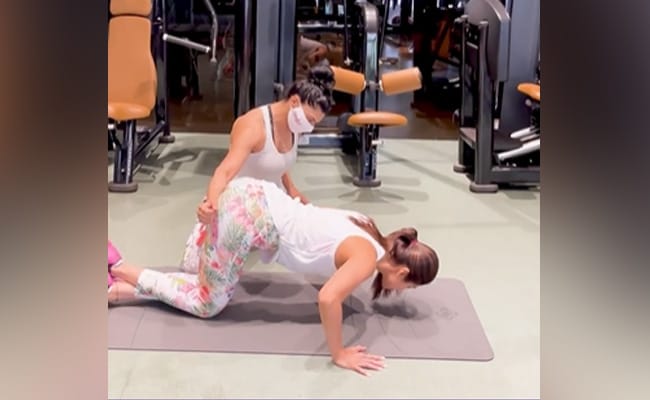 Shilpa Shetty is one of the fittest actresses in the country today. The star often shares pictures and videos of her workout routines on social media. The Nikamma star has begun the week by posting a video of herself on Instagram pulling off a rather complex exercise. In the video she is seen working out under the guidance of celebrity fitness expert Yasmin Karachiwala. In the caption, Shilpa said, “Our body is the vehicle that takes us from one destination to the next. If you don't want it to break down. Maintenance is a prerequisite. One must commit a little time on a regular basis to any kinda fitness regime.”

Speaking about her fitness mantra, Shilpa Shetty added, “For me and most of us “getting back to the grind” meant taking the ‘vacay' mode off… decided to do it with the knee push ups. It works on the chest, shoulder, and triceps. It also helps engage the core and maintain proper form. You can take it to the next level too because it helps to progress into the full push up or advance pushup.”

Tagging Yasmin Karachiwala, the actress added, “Thank you for being the best.”

A few days ago, Shilpa Shetty even shared a video of herself and her son, Viaan Raj Kundra enjoying their London vacation. “Our mood…ever since we left the city," she said in the caption.

While in London, Shilpa Shetty also treated the foodie in her to some tasty treats. In the video, Shilpa is seen biting into a tasty wrap. In her caption, Shilpa wrote, "My sweatshirt is gluten-free, but my wrap is not!”

Before that, Shilpa Shetty even visited a few vineyards in France. Sharing a glimpse, Shilpa said, “What I love doing best…Exploring! Vineyard visit …got to learn so much about viticulture. “RAISIN” a glass to that. #sttropez #vineyard #wine #france #gratitude”

And we cannot get over how lovely Shilpa Shetty looks in this clip as she strolls by Eiffel Tower. “Je t'aime Paris,” Shilpa said with a heart emoji.

Shilpa Shetty was last seen in the film Nikamma. She will also be seen in Rohit Shetty's Indian Police Force as well as Sukhee.