Shilpa Shetty's "Lockdown Saviour" - A Board Game We All Love 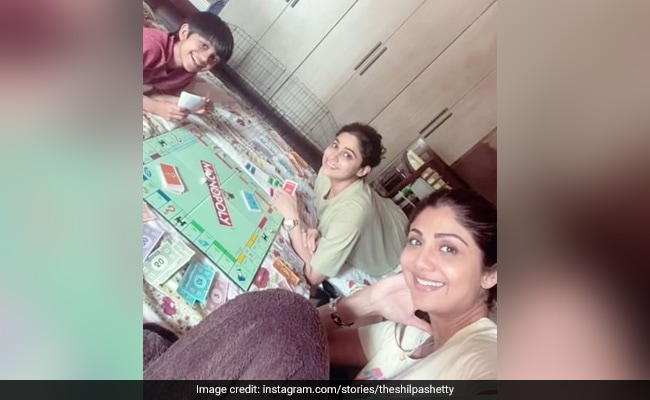 For a large part of the last 18 months, most of us have been forced to stay indoors due to the COVID-19 pandemic. While it can be difficult for several adults to adjust to the 'new normal', things can be a tad bit tougher if you have a child at home and need to keep them occupied. But it looks like actress Shilpa Shetty Kundra has found the perfect solution to kill the lockdown blues. The 45-year-old actress shared a photo of herself on Instagram Stories where she is seen playing a game of Monopoly with son Viaan-Raj Kundra and sister, actress Shamita Shetty. Sharing the photo, Shilpa wrote, “Lockdown saviour!” In the image, the trio is sitting on a bed, with all three of them dressed in casual T-shirts.

Recently, the actress uploaded a heartwarming video of some sibling bonding between her son Viaan and daughter Samisha. The clip features the two sharing coconut water. In the footage, one-year-old Samisha is reaching out to her brother as he sips on some coconut water. Seeing this, he takes the straw out and tries to pour a few drops into her mouth from the other end of the straw. Sharing the adorable clip, Shilpa wrote, “Having a younger sibling somehow makes the older one responsible, protective, mature, and even territorial (I would know!) I've had Rakhi brothers much later in life, but Samisha is lucky to have a real one. To see these visuals just makes my heart melt.”

The actress also shared how she celebrated her son's ninth birthday. In a video, we can see Shilpa and her husband, entrepreneur Raj Kundra gifting their son a puppy on the occasion. A visibly excited Viaan is seen cradling the puppy in his arms. “Introducing ‘Truffle' our new family member. Viaan's been begging for another pe. and I promised him, would get him one when he'd turn 10 and can look after it. He's earned it a year earlier, been such a good boy. Happy birthday my darling,” read the caption.

Shilpa is best known for her work in films such as Baazigar, Dhadkan and Life in a... Metro. In addition to acting, Shilpa has also appeared on reality shows such as Zara Nachke Dikha, Nach Baliye and Super Dancer as a judge. Her upcoming projects include Nikamma and Hungama.