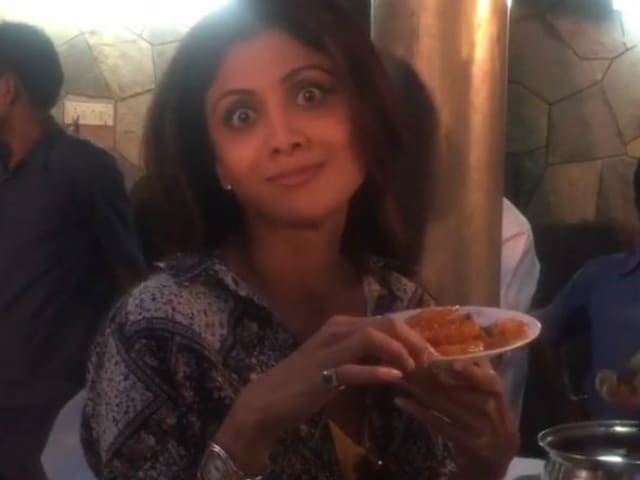 A still from the video shared by officialshilpashetty.

New Delhi: Actress Shilpa Shetty shared two adorable videos particularly for "those who believe" she doesn't eat, starring herself, a halwai, and a lot of jalebis on Instagram on Sunday.

The 40-year-old actress, who clearly found it difficult to contain her excitement, repeatedly mouthed the word "yummy" in the video.

And for those who believe i don't eat.. Here's proof#sundaybinge #dontcare #guiltless #pleasure #happiness

Shilpa could not wait for the jalebis to go "straight into her tummy."

Sunday binge, my Favourite Freshly made Jalebis.All those who think I don't eat, I do #sundaybinge #comfortfood #calories #yummmm

Shilpa, who has a sweet tooth and often indulges in guilty pleasures enjoying desserts and sweets of all sorts, also has an Instagram feed that looks somewhat like this:

A photo posted by Shilpa Shetty Kundra (@officialshilpashetty) on Mar 6, 2016 at 5:50am PST

Spoilt for choice las nite,Dessert after dinner at my place. We r not thinking about what to eat.. But what to do to burn it off!#sweettooth #cravings #worthit #dessertcoma #calories #yoga

And its continues..Thot will keep it Indian with hot Gulabjamuns and kulfi ,but tiramisu,Salted caramel millefeuille and Strawberry rouladegot added thanks to my friend @Kaykasshanapatel #foodcoma #desserts

A photo posted by Shilpa Shetty Kundra (@officialshilpashetty) on Feb 7, 2016 at 6:07am PST