"Every year around this time I miss my fam," Shibani captioned the post 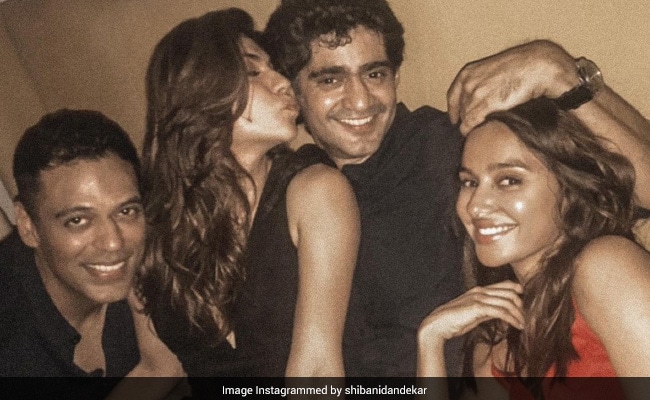 Shibani Dandekar dug out a perfect throwback from her collection, keeping up with the current IPL (Indian Premier League) season. Shibani Dandekar's picture happens to be a throwback, in which she can be seen happily posing with her fellow IPL presenters Archana Vijaya, Gaurav Kapur and Samir Kochhar. Posting the picture on Instagram, she wrote in her caption: "Every year around this time I miss my fam." She added the hashtags #Geeks, #For5crorewouldyou, #extraaainningst20 and #ipl to her post. Reacting to Shibani's post, Archana Vijaya wrote in the comments section: "Aww! Happy times, seems like so long ago, given the current scenario! Hope you all are safe. Sending lots of love and kisses my favs."

Shibani Dandekar is a popular name in the Indian television industry. She has participated in reality shows such as Khatron Ke Khiladi and Jhalak Dikhhla Jaa. Shibani was last seen in the second season of Amazon Prime Video's web-series Four More Shots Please! , in which Samir Kochhar played the role of her husband. Archana Vijaya, a model, had won the TV show Get Gorgeous. She has walked the ramp at the Rome Fashion Week and was a part of the TV reality show Jhalak Dikhhla Jaa 5.

Gaurav Kapur, a popular host of sports shows on TV, has appeared in films like A Wednesday and Ugly Aur Pagli. Samir Kochhar is best-known for starring in TV shows and web-series like Bade Achhe Lagte Hain, Typewriter, Sacred Games and The Test Case.