Shanaya Kapoor Tried Dancing To Shakira's Song. So, How Did She Do?

"Even though I didn't breathe for 60 seconds straight, I always have the best time doing a drum solo," wrote Shanaya Kapoor 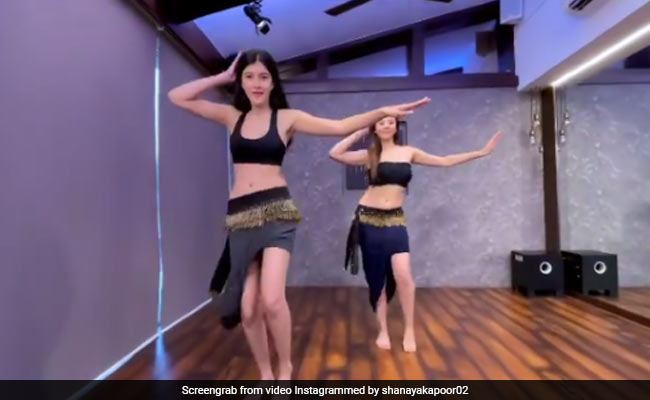 Shanaya Kapoor in a still from the video. (courtesy shanayakapoor02)

Shanaya Kapoor, just like her cousin Janhvi Kapoor, is a great dancer and she has been undergoing belly dance training for a while now. On Thursday, she posted a video of herself on her Instagram profile, in which she can be seen doing belly dance to a mix of Bamboo and Hips Don't Lie by Shakira. Shanaya can be seen dancing along with her instructor Sanjana Muthreja. They can be seen twinning in black outfits. Coming back to Shanaya's video, she can be seen dancing gracefully to the track and she was equally adept at the technical aspects of belly dancing with her perfect undulations, isolations and even the shimmy.

"Even though I didn't breathe for 60 seconds straight, I always have the best time doing a drum solo with Sanjana Muthreja," wrote Shanaya. Without much ado, check out Shanaya Kapoor's video here:

A few days ago, Shanaya Kapoor shared a video from her belly dance session, for which she borrowed her BFF Suhana Khan's skirt. Shanaya captioned the post: "Tried something different with Sanjana Muthreja. PS_ Thanks for letting me steal your skirt Suhana Khan."

Before Shanaya Kapoor made her Instagram profile public, her mother and jewelry designer Maheep Kapoor shared a video of her daughter's dance. "She gets it from her mama," Maheep Kapoor wrote.

Shanaya Kapoor, daughter of Bollywood actor Sanjay and Maheep Kapoor, began her career as an assistant director for Netflix film Gunjan Saxena: The Kargil Girl, which featured her cousin Janhvi Kapoor in the lead role. Shanaya also made cameo appearances in in Netflix's The Fabulous Lives Of Bollywood Wives. She came into the limelight when she made her debut at the Le Bal in Paris in 2019.