Shanaya Kapoor, Sleepy On LA Vacation, Gets This Comment From Cousin Harshvardhan

Sanjay Kapoor is sharing pictures from the family vacation, which includes Maheep, Shanaya and Jahaan 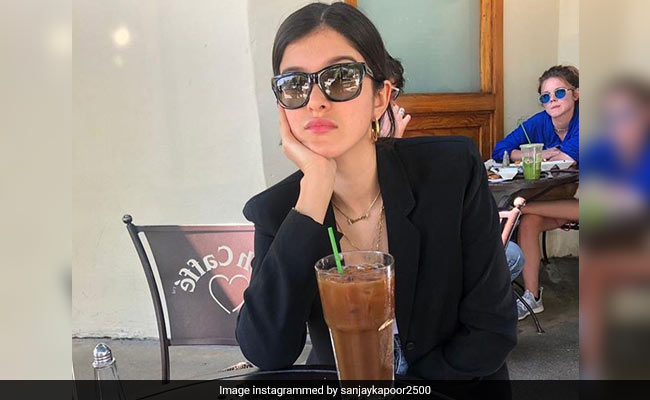 Shanaya Kapoor is on a vacation with her family. (Image courtesy: sanjaykapor2500)

Actor Harshvardhan Kapoor has all things nice to say about his cousin Shanaya Kapoor. Sanjay Kapoor shared a picture of his daughter on Instagram from their Los Angeles vacay and in the comments thread, Harshvardhan wrote: "Selena Gomez meets Demi Lovato meets Hailey Bieber Shanaya Kapoor. Itsssssss a VIBE." Shanaya, the elder of Maheep and Sanjay Kapoor's two children, looked sleepy (but cute) in the picture as she posed with her iced coffee. Harshavardhan isn't the only one who has compared Shanaya's sharp features to international celeb. Few months ago, Anil Kapoor commented on a picture if the actress-in-waiting that she is 'India's answer to Catherine Zeta-Jones.' Sanjay Kapoor shared several other pictures from the family outing, which also included Maheep and their son Jahaan.

Going by Shanaya's La La Land diaries, she appears to be on the verge of becoming a style icon. For one of the outings, Shanaya paired her denim shorts with a tee and blazer. On another day, she stepped out in a lime green ruffled asymmetric dress. Shanaya's black faux-leather palazzos are a must have in every wardrobe.

Here are all the nice pictures of the Kapoors vacation in Los Angeles:

Happy Father's Day to me

One of the best vineyards #castillodiamorosa

Shanaya Kapoor is currently working as assistant director on the Gunjan Saxena biopic. Sanjay Kapoor earlier told Pinkvilla that Shanaya intends to be an actor and that the Gunjan Saxena biopic is Shanaya's prep work for her full-fledged Bollywood debut. "Before she wanted to take up a film, she didn't want to be abroad for a three-year-course. Instead, she chose something personal like this," he said.