In the photos that Shanaya has shared on Instagram, we see her beaming in an athleisure outfit with shades of yellow 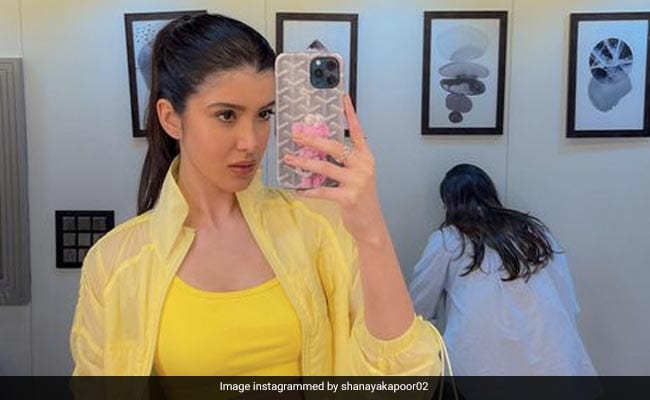 Hey Shanaya Kapoor, thank you for making our weekend look brighter. Don't know what we are talking about? Our advice: head straight to Shanaya's Instagram timeline. The latest entry will definitely light up your screen. Seems like the pictures were taken only to brighten up our day. In the photos that Shanaya has shared on Instagram, we see her beaming in an athleisure outfit with shades of yellow. Her mirror selfies have put the Internet to a halt. What adds to the charm is her caption that goes like this, "Look at the bright side of life." It seems that Shanaya loves to play with emojis. She added a train of yellow-hued emojis in her caption. She also put up a hashtag "yellawesome." Shanaya's mother Maheep Kapoor approves the post and wrote,"Yelling awesome."

Shanaya Kapoor's selfies game is on point. Look at this video compilation where Shanaya glows with her natural beauty. "Here comes the sun," she wrote in the caption. The star kid definitely loves everything bright and sunny.

It's not just the Sun that brightens up Shanaya Kapoor's days. Sometimes, she needs only a pep talk with her furball in order to keep herself smiling. Look at them enjoying their time together in this Instagram album. Shanaya wrote, "Deep conversations with my boy." She added a heart emoji too.

If she has nothing else to gush about, Shanaya Kapoor will share photos of her favourite pyjama set on Instagram. The caption read, "Last night wearing my favourite PJs…Hehe, I had to capture the moment." Well, her friends were quick to share their reactions. Navya Naveli Nanda wrote, "Thanks for the update." Actress Ananya Panday pointed out, "These are not ur PJs. Please don't lie to the world."

Shanaya Kapoor is the daughter of actor Sanjay Kapoor and Maheep Kapoor. She debuted in Bollywood as an assistant director for the Netflix original movie Gunjan Saxena: The Kargil Girl which featured her cousin Janhvi Kapoor.