"Oh my god, Shanaya Kapoor! Your hair looks gorgeous. But are you sure you have seen a bowl of spaghetti before?" Karan Johar shared the video with these words. 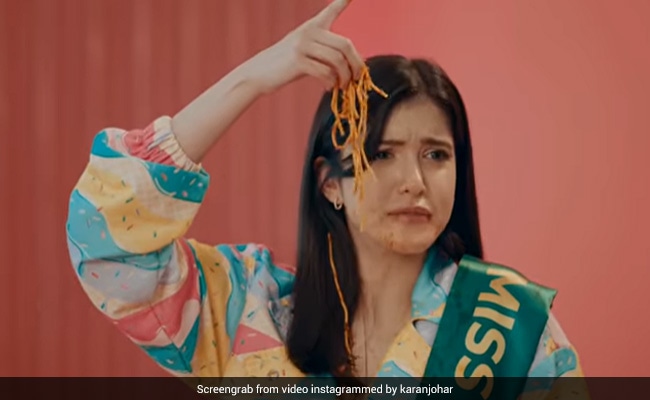 Shanaya Kapoor in a still from the advert (courtesy karanjohar)

Shanaya Kapoor, who is all set to make her big Bollywood debut with a Dharma movie, recently featured in her first ever advert - a commercial for a personal care brand. The advert was shared by none other than Karan Johar, who will be launching Shanaya Kapoor in Bollywood. In the advert, Shanaya adds oodles of the hilarity quotient with her antics, to deliver the point: "There's perfection in your imperfections." The advert begins with Shanaya prepping for a photoshoot which involves posing with a bowl of spaghetti - however, she gets a bit too carried away by the spaghetti bowl and it turns out to be a messy affair. In the end, Shanaya is seen taking the bowl away because "Why waste!"

"Oh my god, Shanaya Kapoor! Your hair looks gorgeous. But are you sure you have seen a bowl of spaghetti before?" Karan Johar shared the video with these words. Needless to say, Karan Johar's shout out for Shanaya Kapoor rekindled the nepotism debate in the comments section. In the past, the 49-year-old filmmaker was criticized for only launching star kids in the film industry.

Shanaya Kapoor is the daughter of actor Sanjay Kapoor and Maheep Kapoor. Shanaya is the cousin of actresses Sonam Kapoor and Janhvi Kapoor. Shanaya made her debut at the Le Bal in Paris in 2019. However, she has also already joined Bollywood but not as an actor but as an assistant director for Netflix release Gunjan Saxena: The Kargil Girl, which stars Janhvi Kapoor in the lead role.