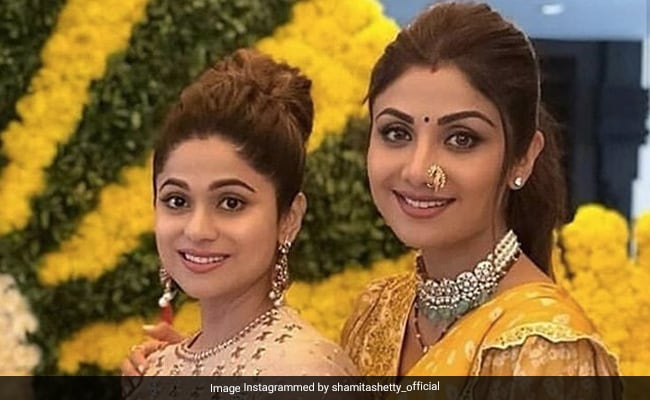 Shamita Shetty, in coronavirus lockdown, seems to be rummaging through the family albums and revisiting memories. On Tuesday, Shamita Shetty took another trip down the memory lane and fished out a not-so-old throwback picture of herself with sister Shilpa Shetty and it is just too beautiful. In the picture, Shamita and Shilpa can be seen posing for the camera as they smile with all their hearts. Dressed in ethnic outfits, Shilpa can be seen holding Shamita. Sharing the picture, Shamita captioned it with the adorable nicknames that the Shetty sisters call each other by. "Munki and Tunki," wrote Shamita. She also added the hashtags "sister squad," "sister love" and "memories" to her post. Take a look:

Shamita Shetty, who is currently confined to her home due to the nationwide lockdown, keeps sharing adorable family pictures featuring Shilpa Shetty. A few days ago, Shamita Shetty shared a snippet of her fam-jam with Shilpa Shetty, Raj Kundra, Viaan and their mother. "Major missing," Shamita captioned the post. Take a look:

A few weeks ago, Shilpa and Shamita trended a great deal for their adorable sibling's day wish for each other. Shamita shared a video collage of herself and Shilpa and wrote an elaborate caption, an excerpt from which read, "Love you Munki, more than I can express. You mean the world to me and I'm totally incomplete without you." Take a look:

Awww this is just the sweetest mesg !! With everything hapn I dint realise yest was #siblingday .. love you munki, more than I can express u mean the world to men I'm totally incomplete without u #Repost @theshilpashetty with @get_repostMissed #SiblingDay yesterday. So this is for you @shamitashetty_official A sister is someone who knows your worst fears and darkest secrets. When your parents don't understand your sister always will (or at least pretends to ) If as a woman you don't understand how you can love your sister sooooo much that you can kill for her and wring her neck and kill her at the same time... then you are a single child! From all our shenanigans to all our 'girlie issues', I will always cherish those childhood memories, even when we fought like cats & dogs and then made up like nothing happened . But most importantly, I had someone who kept me going on my lowest days amid all the struggles life could throw at me, and for that I'm forever grateful to you for standing by me. Time has flown by but this must be said, you are IRREPLACEABLE. It's "US" against the World, always... my Tunki Ae love ya!Also, wishing all of you a very Happy and Blessed Easter! . . . . . #20DaysOfGratefulness #Day17 #HappyEaster #sisters #MunkiAndTunki #family #siblinglove #gratitude #love

On the work front, Shamita has been a part of films like Fareb, Bewafaa, Zeher and Cash among others. Shamita also participated in television reality shows such as Bigg Boss 3 and Jhalak Dikhhla Jaa. On the other hand, Shilpa Shetty is set to make a comeback to films after 13 years with Sabbir Khan's Nikamma.