Shama Sikander Is Trending For Her Stunning Sydney Vacation Pictures 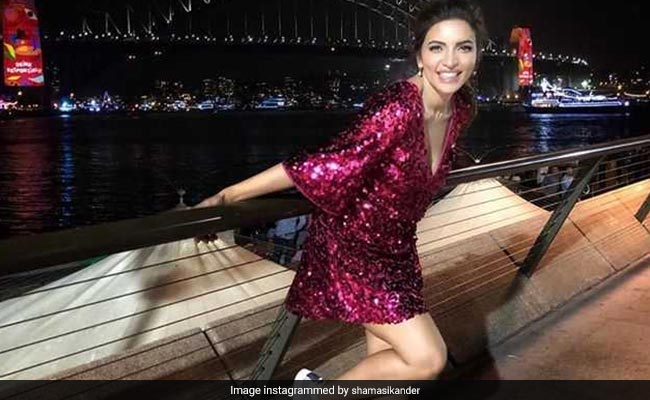 New Delhi: Shama Sikander is one of those stars, who never fails to elate her fans with her social media posts and the Internet loves her back. Shama Sikander is trending, yet again, because of her stunning pictures from Sydney. Shama, who is best known for featuring in TV serial Yeh Meri Life Hai, is currently holidaying in the beautiful Australian city and sharing calendar-worthy pictures on Instagram. "Take a leap of faith and begin the wondrous new year by believing. Wish each one of you a very happy and joyful year ahead. Cheers 2018," Shama captioned one of the images. Shama has already made pit-stops at some famous places in Sydney. From enjoying at the Sydney Opera House and basking in the sun at the Manly Beach to some rocking pictures in the sea, Shama has done it all.

Shama has sported the beach look in a white bikini and she can be seen totally relaxing under the sun and making each moment count of her vacation.

"A woman without curves is like jeans without pockets, you don't know where to put your hands. #ManlyBeach #Curvacious #Sydney #TravelDiaries," Instagrammed Shama.

A woman without curves is like jeans without pockets, you don't know where to put your hands. #ManlyBeach #Curvacious #Sydney #TravelDiaries

A sass a day keeps the basics away #ManlyBeach #Sydney #TravelDiaries

Shama welcomed the New year in Sydney. With a little sparkle and shine, all the way from the Sydney Opera House, Shama sent love: "Take a leap of faith and begin the wondrous New Year by believing.

Wish each on of you a very happy and joyful year ahead. Cheers 2018!! #Sydney #TravelDiaries #HappyNewYear #Welcome2018."

Take a leap of faith and begin the wondorous new year by believing. Wish each on of you a very happy and joyful year ahead. Cheers 2018!! #Sydney #TravelDiaries #HappyNewYear #Welcome2018

Of all the books in the world, the best stories are found between the pages of a passport. #TravelDiaries #Sydney #NewYearGoals

Promoted
Listen to the latest songs, only on JioSaavn.com
Earlier, Shama Sikander made headlines when she confessed to have been diagnosed with bipolar disorder five years ago. She opened up about the extent of her struggle with the psychological disorder. The actress explained she was "bored" with herself and with her life, reported Times Of India. "I started finding conversations boring. I didn't want to meet anyone and stopped liking myself. Everybody I met during that phase was bored of life. My career and love life added to the stress. I wasn't eating or looking right. This can't be overnight; I am sure it must have been accumulating since several years," Times Of India quoted her as saying.

Shama has also featured in films like Aamir Khan's Mann and a short film Sexaholic. She also starred in a web series titled Maaya.