"Which movie are you prepping for here?" commented Ishaan on Shahid's post 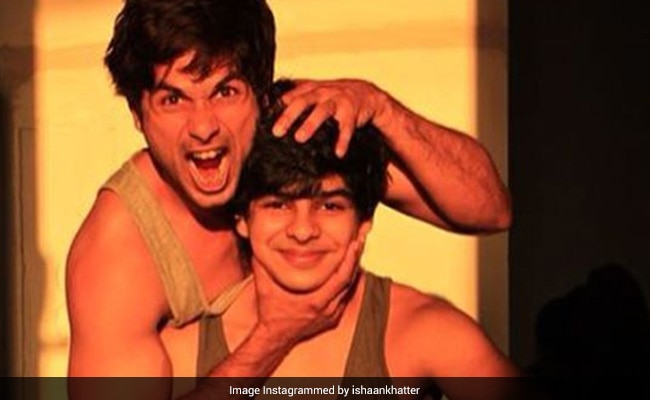 Shahid Kapoor was in a mood to try hilarious Instagram filters on Saturday. The actor, in his recent entry, shared a really funny video that he made using an Instagram filter and guess what? His post prompted ROFL comment exchange with his brother Ishaan Khatter. In the clip, Shahid can be seen making goofy faces. Reacting to the post, Ishaan Khatter teased his brother and hilariously commented: "Which movie are you prepping for here?" The 39-year-old actor, in his reply, gave a twist to the lyrics of the track Tu Mere Agal Bagal Hai from his 2013 film Phata Poster Nikla Hero and wrote: "Khaali peeli khaali peeli tokne ka nahi." In case you didn't know, Ishaan's new film titled Khaali Peeli will soon release online.

Shahid Kapoor's post also got comments from his mom Neelima Azeem. "You have to play this character, please," read one of her comments while in another, she wrote: "Adorable and ouch funny."

In terms of work, Ishaan Khatter made his debut as a lead role in the industry with Majid Majidi's Beyond The Cloud. He then featured in Shashank Khaitan's Dhadak. The actor was last seen in Mira Nair's A Suitable Boy, co-starring Tabu. He will also share screen space with Ananya Panday in Khaali Peeli.

Shahid Kapoor will next be seen in Jersey, which will also star Pankaj Kapur.